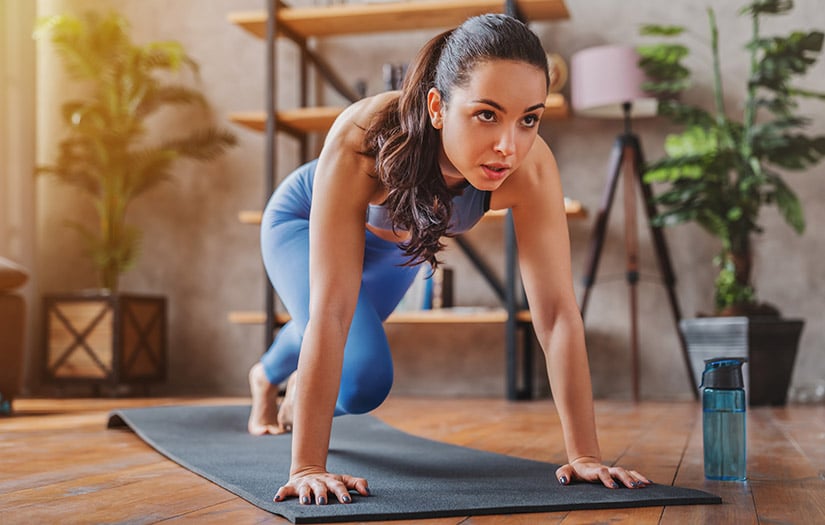 Apart from the more obvious gender differences like pregnancy and some aging-related conditions (e.g., osteoporosis, menopausal changes), how much thought is generally given to the anatomical and physiological differences between men and women when designing programs for female clients? A fair assumption might be very little considering the lack of available information, and the lack of attention paid to these differences.

Enroll in the Women's Fitness program to learn even more about this topic!

Perhaps the most cited gender difference relates to the fact that females normally have a wider pelvis (for childbearing purposes), which when coupled with shorter limb-lengths increases what is termed the Q-angle at the knee (Figure 1-1). The Q-angle is the measurement of the angle formed between the long axis of the femur bone (representing the quadriceps pull) and the long axis of the tibia (representing the patella tendon pull).

On average this angle deviation is approximately 17 – 18° in women, in comparison to 12 – 13° in men, but may be greater in women with wider hips and shorter limbs. The very nature of this deviation creates a potential weak link during basic (e.g., walking) and advanced movements (e.g., jump-landing). 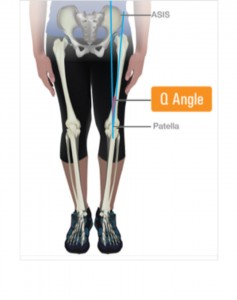 With females having smaller bones, ligaments, and muscles, which implies less surface area for attachment and support (integrity); and a more-narrow groove between the femoral epicondyles (bony structures at the lower end of the femurs) through which two major knee ligaments pass (anterior cruciate ligament - ACL and posterior cruciate ligament – PCL), this creates additional injury risks as these ligaments undergo more shearing during movement, especially during rotational-type movement between the femur and tibia.

Consider as well, gender-specific hormones (e.g., relaxin) and concentration levels which create greater joint laxity; and the slight gender difference in bone shape at the knee (upper part of tibia - tibial plateau is shorter and more rounded), and what you have is a greater potential for knee injuries in females, especially within the ACL (5). In fact, college-aged females suffer 2 – 6x the number of knee injuries playing the same sports as men, and approximately 70% of these ACL injuries occur in non-contact activities like jumping, jump-landing, stopping, and directional changes (6).

Within the upper extremity, men have broader shoulders to support more muscle mass, which in turn provides advantages to the muscles acting at the shoulders. This difference helps explain why woman only exhibit 52% of the strength of a man in the upper extremity versus 66% of the strength of a man in the lower extremity (7). So, how do these knee and shoulder disparities impact training? Given the popularity of higher-intensity, whole-body exercise-type programs (e.g., jumping exercises, squat-presses, cleans, etc.), it certainly justifies the need to first examine, then establish or improve knee and shoulder stability, before progressing to strengthen both regions, regardless of goals or training experience. Herein lies the value of a fitness professional well versed in assessing levels of stability and mobility within the lower extremity (ankle, knee and hip) and upper extremity (lumber/thoracic spine, scapula-thoracic region and glenohumeral joint) and throughout the entire kinetic chain. Keep in mind however, that these assessments also hold great value in men. Figure 1-2 provides a simplified overview of the stability-mobility relationship throughout the kinetic chain that the body follows during basic movement patterns (e.g., walking, bend-and-lift, push, pull, and rotation) (8). This illustration provides a template for professionals to follow when aiming to re-establish stability and mobility throughout the entire kinetic chain. Once assessed, any designed programs, whether corrective or active/functional in nature, should emphasize:

Figure 1-2: The stability-mobility relationship throughout the kinetic chain. 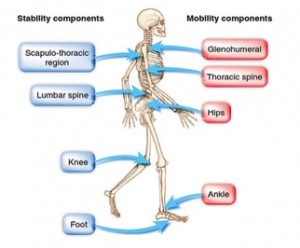 Likewise with anaerobic exercise, these same ovarian hormones negatively impact the energy pathways, which is significant given the popularity of HIIT-type workouts that rely predominantly upon these systems (1, 4, 9-10):

Collectively, these factors diminish the overall efficacy and efficiency of the anaerobic pathways in women. So what does this all mean? Although no clear guidelines exist, the overall takeaways with respect to exercise is that females are:

An additional insight on gender differences pertains to arousal, which can impact exercise performance. Researchers examining sympathetic nervous responses (system responsible for our ‘fight-or-flight’ response) have observed lower activation of this response to stress and coined the phrase ‘tend-and-befriend’ instead (2, 12). Oxytocin is a hormone released from the pituitary gland that functions to initiate the letdown reflex during lactation and stimulates uterine contractions during childbirth, but also plays a significant role in social or affiliative (bonding) behaviors. Because of this hormone, females appear to demonstrate a diminished ‘fight-or-flight’ response when stressed. This response may decrease physical aggression and potential to engage as aggressively in physical activity as men.

Table 1-1 provides the top reasons cited for participation in exercise by women of different age classifications (13). Whether reasons are to look better, lose weight, stay healthy or preserve functional strength, participation in resistance training is critical to the success of each. Effective strategies for weight loss should include resistance training as it minimizes potential losses of lean body mass as illustrated in Figure 1-3 (14). 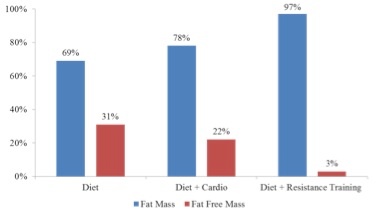 As part of the 2008 Physical Activity Guidelines for Americans issued by the U.S. Department of Health and Human Services (HHS), adults should participate in moderate or high-intensity muscle-strengthening activities on two or more days a week (15). Unfortunately, participation by females in resistance-type activity appears to fall very short of that guideline as illustrated in Figure 1-4 (16). Social physique anxiety (i.e., fear of bulking up) is a common reason cited by women for not participating weight training, but so too are lack of knowledge and understanding on programming and technique. Social physique anxiety tends to be higher in women who exercised in a mixed-sex facility and results in shortened workouts. In this case, consider training these female clients in more secluded areas or during low-traffic times. Emphasize the development of skill and competence (self-efficacy) initially using selectorized machines which are generally a good fit.

Although most fitness professionals are competent in discussing the multiple benefits of resistance training to women, the real challenge lies with asking the right questions, and then listening to, and understanding the apprehensions and barriers or pre-existing attitudes or belief systems that may hinder voluntary participation. Women who generally exercise for weight loss, toning and aesthetics often demonstrate lower levels of self-esteem and body satisfaction in comparison to women who exercise to improve mood, health and enjoyment. Consider exploring deeper reasons connected to health and moods rather than simply aesthetics and weight loss.

Finally, for those female clients comfortable with resistance-training, but focused upon toning and shaping rather than building muscle mass (difficult to do considering how females have only 5 – 10% of the testosterone of their male counterparts), programs should follow some simple guidelines (17):

The information contained within this article provides only some of the essential differences that exist between the genders. These ideas and others should always be carefully considered when programming for female clients to optimize the overall training experience and the opportunity to attain any desired outcomes. 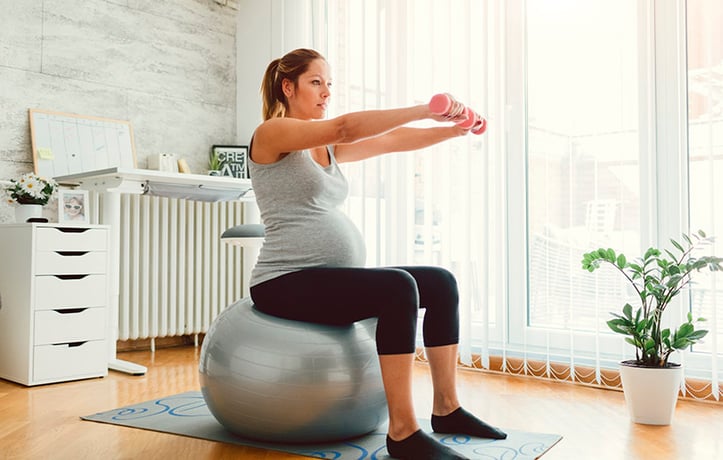 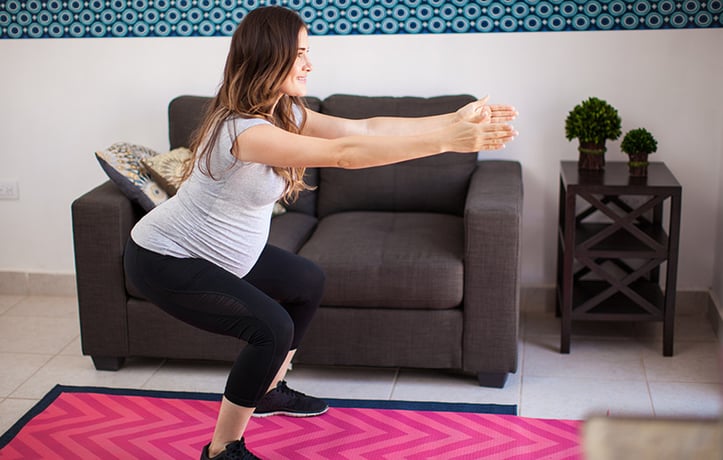 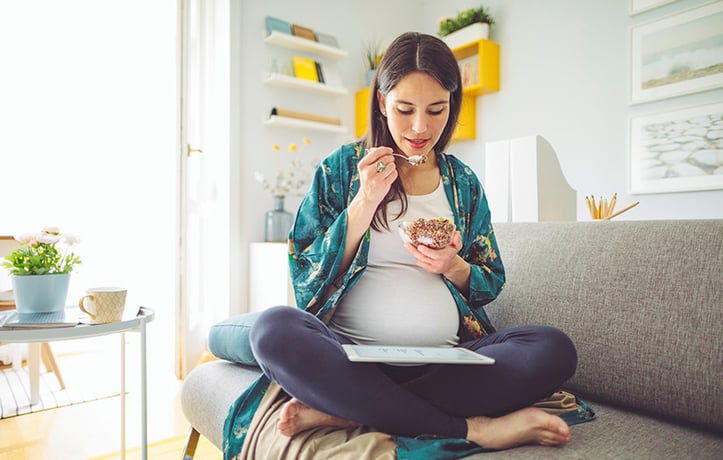