Rhabdomyolysis: What Every Fitness Pro Needs to Know 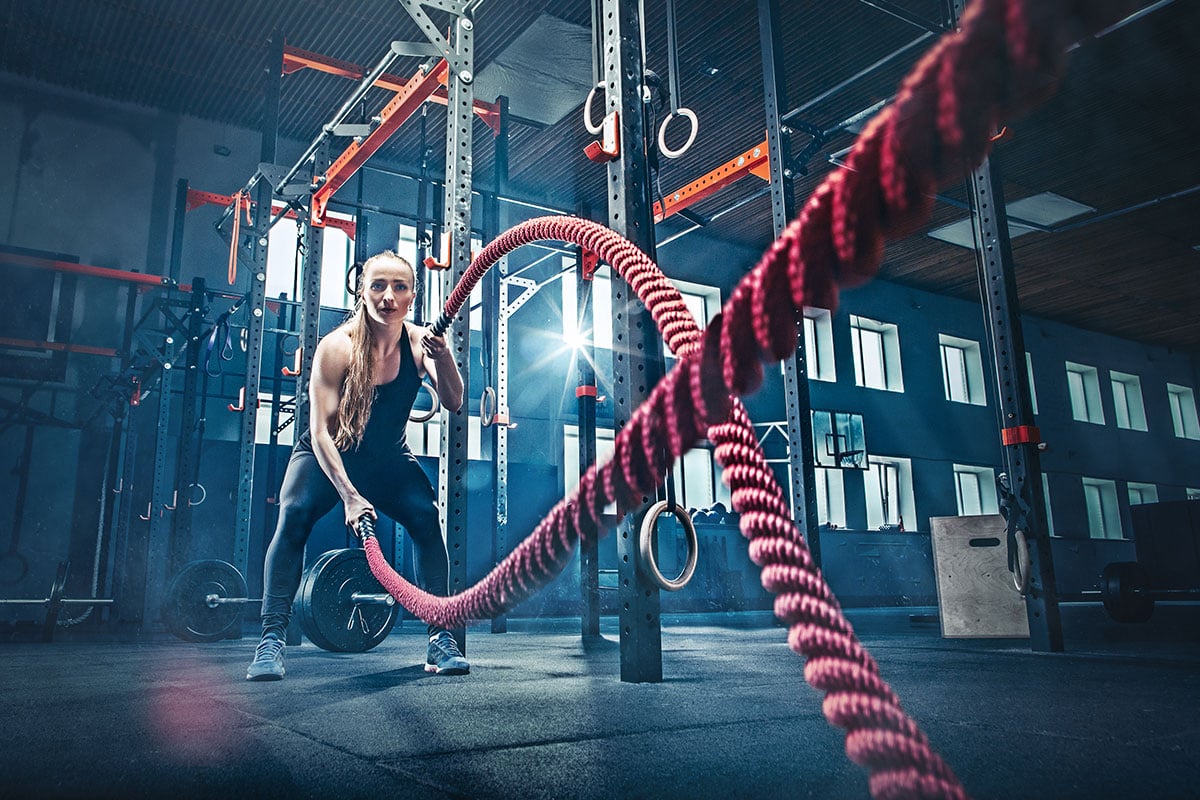 Vu Nguyen was strong and fit. He didn’t drink or smoke. But on a sweltering July day in 2018, the 50-year-old Cleveland police officer collapsed during a 1.5-mile run that was part of a training exercise.

He died 4 days later. Medical authorities blamed rhabdomyolysis, a rare but
serious medical disorder that can result from overexercising (Hein 2018). In
another incident that grabbed headlines, the Paralympics snowboarder Amy Purdy
issued a plea to friends and fans from her hospital bed: “You have to listen to
your body. When it is telling you to stop, stop!” Purdy, a double amputee who
also competed on Dancing With the Stars, pushed too hard doing pullup
sets while training for the 2016–2017 snowboarding season. She was sore for a
day then noticed swelling in one arm, which sent up a red flag. She knew about
rhabdomyolysis because it had landed a friend of hers in the hospital the year
before. Purdy survived, but it was a long and occasionally painful recovery
(Mateo 2018).

I’ve been warning fitness professionals about the risks of rhabdomyolysis—or
“rhabdo,” as some of us call it—for more than a decade. While athletes and
fitness enthusiasts who engage in high-intensity exercise are the more obvious
candidates for rhabdo, it can also happen to novices and people trying an
activity they haven’t done before. Since veterans and newcomers alike are
vulnerable to the disorder, fitness pros need to understand the causes,
symptoms and tactics for prevention. This brief overview will give you the
basics.

Rhabdomyolysis (rab-doe-my-OH-li-sis) occurs when striated muscle fibers rupture, releasing their contents into the bloodstream. This can have serious consequences that may require
hospitalization.

Rhabdo can result from a variety of conditions, including blunt trauma, surgery,
burns, drug and alcohol abuse, poisoning, electrocution, infections, and even
some medications. When exercise triggers the disorder, we call it exertional
rhabdomyolysis or exercise-induced rhabdomyolysis (Kim et al. 2016).
Some evidence hints that exertional rhabdomyolysis may be on the rise (Knafl et
al. 2018), though we don’t know for sure how often it occurs.

The condition usually follows engagement in high-volume, high-repetition, intense or unfamiliar exercises or activities. Exercising in the heat and pushing beyond one’s physical capabilities can play
roles in rhabdo.

The biochemical mechanism of exertional rhabdomyolysis is not fully understood (Kim
et al. 2016). It is thought that intense activity significantly depletes adenosine triphosphate (ATP) levels faster than they can be restored. This causes dysregulation of cellular sodium, potassium and calcium concentration and an increase in free radical production. Ultimately, this leads to a
breakdown in cytoskeletal membrane integrity, allowing cellular components to
enter the blood.

Fitness professionals should not
underestimate the hazards of rhabdo, which can cause many risky conditions and
symptoms:

Fitness pros may have heard about one rhabdo
symptom: dark-colored urine, often described as looking like iced tea or cola.
The color change happens because high levels of the muscle protein myoglobin
get into the urine during the kidneys’ blood-filtering process.

Excessive
myoglobin is toxic to the kidneys and can cause kidney failure. Indeed, some
people may require dialysis to protect against kidney damage. Note that while
darkened urine is the best-known symptom of rhabdo, it doesn’t happen to
everyone with the condition.

Many people with rhabdo report swelling of
the muscles used in the activity they were doing. The medical term is compartment
syndrome, which results from increased fluid pressure inside muscles after
an injury or physical trauma (which can be caused by overexertion). This
swelling is not like the temporary “pump” some gym-goers look for after
exercise.

Compartment
syndrome is serious and painful because it can cut off blood supply to muscles.
It can also cause muscle weakness and an inability to bend or extend limbs.
Some people have reported being unable to fit into clothing because of the
swelling. Sometimes, surgery is required to relieve the pressure.

The incidence of rhabdo in the general population is not well-known. Most reports do not get published by clinicians. Some individuals who develop the condition never go to the hospital, further reducing the number of cases reported.

Literature
reviews usually quote 26,000 cases each year from all causes, many of which are
attributed to exercise (Sauret, Marinides & Wang 2002). Unfortunately,
these statistics date to the 1990s. More recent data on the prevalence of
exercise-induced rhabdomyolysis in the general population cannot be located.

Much of what we know about exercise-induced
rhabdomyolysis comes from reports of hospital admissions. These reports have
documented rhabdo in many different groups:

As this
list suggests, exertional rhabdomyolysis can ­occur in both fit and unfit
individuals. Though high-profile rhabdo cases occasionally make it into news
media reports, I suspect that a large number of instances go undocumented. Do a
quick check on #rhabdo on your favorite social media channels and see for
yourself.

Exercise intensity seems to increase the risk
of rhabdo, and it’s important to remember that activities which don’t seem
intense to fitness professionals may seem so to clients at a lower fitness
level.

That
said, intensity is not the only factor. In some people, activities not
considered intense can initiate the disorder. For example, one report noted
that a 29-year-old man developed rhabdomyolysis in his abdominals after
performing 30–40 situps a day for just 5 days (Kao et al. 1998). The man in
this report said he was a novice and not accustomed to exercise. In another
report, a 55-year-old man developed rhabdomyolysis and kidney failure after
gardening for several hours (Vucicevic 2015).

These reports highlight an often-missed aspect of exertional rhabdomyolysis: It appears to erupt after exercises and activities that people are not accustomed to doing. For personal trainers—whose clients are often novices—this is an important point to keep in mind.

In
summary, the risk of rhabdomyolysis generally increases with the intensity,
volume, repetitiveness and novelty of the activity or exercise.

Medical professionals
have many ways to determine if someone has rhabdo, including checking for
muscle swelling, weakness and pain and taking a detailed health history.
Physicians often test for elevated levels of an enzyme called creatine
kinase (CK), also known as creatine phosphokinase (CPK) (Keltz, Khan
& Mann 2014). CK can be a marker of muscle damage.

While
exercise can raise CK levels, rhabdo can push them to more than 10 times higher
than normal. Don’t be surprised if your post-rhabdo clients tell you how high
their CK levels rose.

Doctors
also test for myoglobinuria—the presence of myoglobin in the urine
(Keltz, Khan & Mann 2014). Tests scan for electrolyte imbalances and
elevated liver enzymes, as well. Thus, there is more to diagnosing rhabdo than
the color of someone’s urine.

Drinking large amounts of water to combat
rhabdo appears to be a popular home remedy online. While fluid intake may
mitigate rhabdo’s damage to the kidneys, it does not address other effects,
such as liver and heart issues. In theory, overhydration could lead to hyponatremia
(water intoxication), which can be just as serious as rhabdomyolysis. Some
research suggests that hyponatremia may make exercise-induced rhabdomyolysis
more likely (Chlíbková et al. 2015).

(Editor’s note: For an in-depth look at hydration, read “Hydration: Through the Lens of Fitness and Health” in the Spring issue of American Fitness.)

Do not confuse rhabdomyolysis with delayed-onset
muscle soreness (DOMS). While the pain from DOMS and rhabdo may coincide,
there’s an easy way to tell the difference: DOMS hurts only when the exerted
muscles move. It doesn’t hurt when they are at rest.

On the
other hand, rhabdo pain is often present at rest—and is frequently described as
unbearable. Some people have reported that the pain began soon after they
stopped exercising, growing in intensity as the hours went by.

Because people can confuse DOMS with rhabdo,
they may be tempted to reach for over-the-counter (OTC) analgesics like
aspirin, ibuprofen (Advil) or acetaminophen (Tylenol) to deal with the pain. As
a fitness pro, it’s outside your scope of practice to recommend medications,
but you need to understand that OTC pain relievers can increase stress on the
kidneys and liver, potentially making rhabdo worse. If your clients have
rhabdolike symptoms, refer them immediately to their physician for a formal
diagnosis and proper medical attention.

How can fitness trainers reduce the odds of a
client accidently getting rhabdo during workouts? After reviewing the research
and speaking to many who have developed this disorder, I suggest these
guidelines:

Group exercise instructors have a more
difficult challenge because they often do not know who will be in their class
until it begins. To reduce the risk of rhabdo in group classes, adopt these
strategies:

Exertional rhabdomyolysis sounds scary. And,
yes, it can lead to serious health issues, but it doesn’t have to. Education is
the best defense. Fitness professionals can play a leading role in helping
people understand the risks of rhabdo and know how to grow stronger without
getting hurt.

Chlíbková, D., et al. 2015. Rhabdomyolysis and exercise-associated
hyponatremia in ultra-bikers and ultra-runners. Journal of the International
Society of Sports Nutrition, 12 (1), 29.

Thompson, T.L., Nguyen, T.X., & Karodeh, C.R. 2018. Twelve cases of
exertional rhabdomyolysis in college football players from the same institution
over a 23-year span: A descriptive study. The Physician and Sportsmedicine,
46 (3), 331–34. 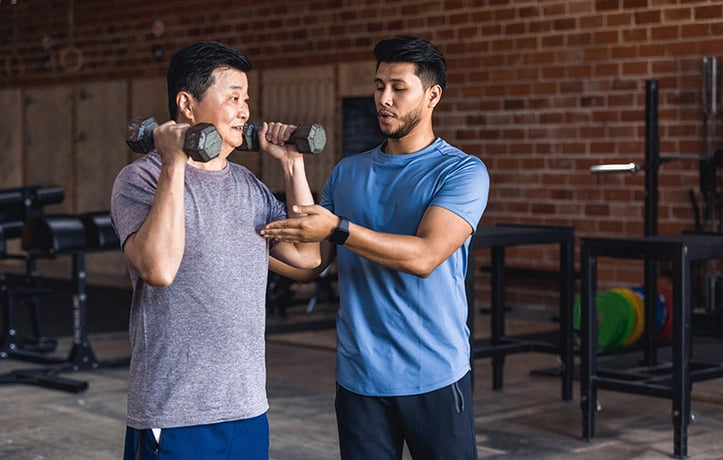 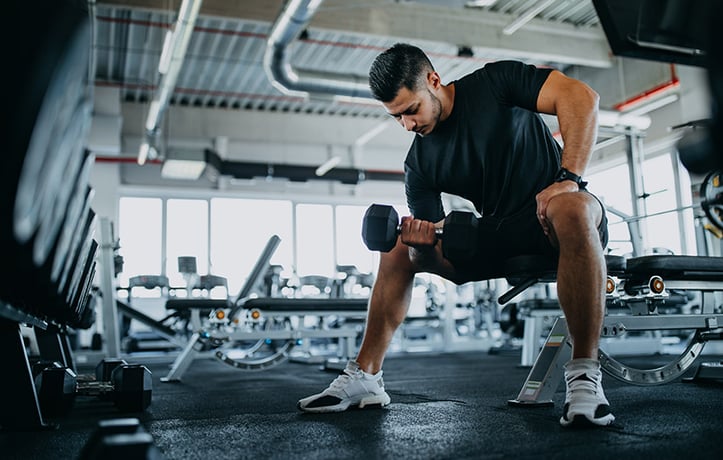 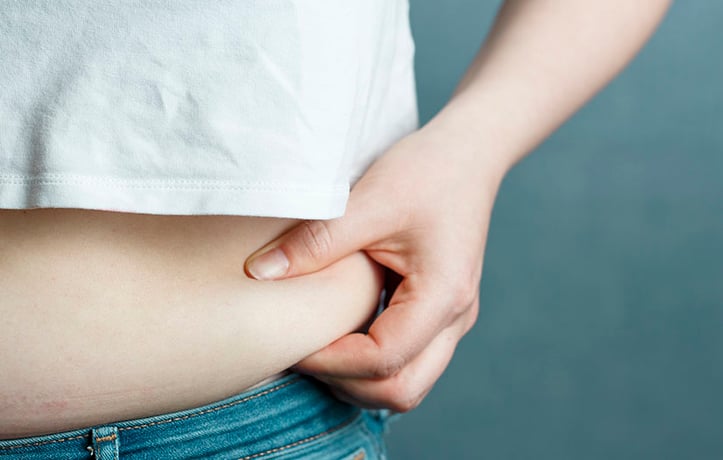 No Love for Those Love Handles: Dispelling Myths About Body Fat Reduction