New clients? Get to the core of the matter! 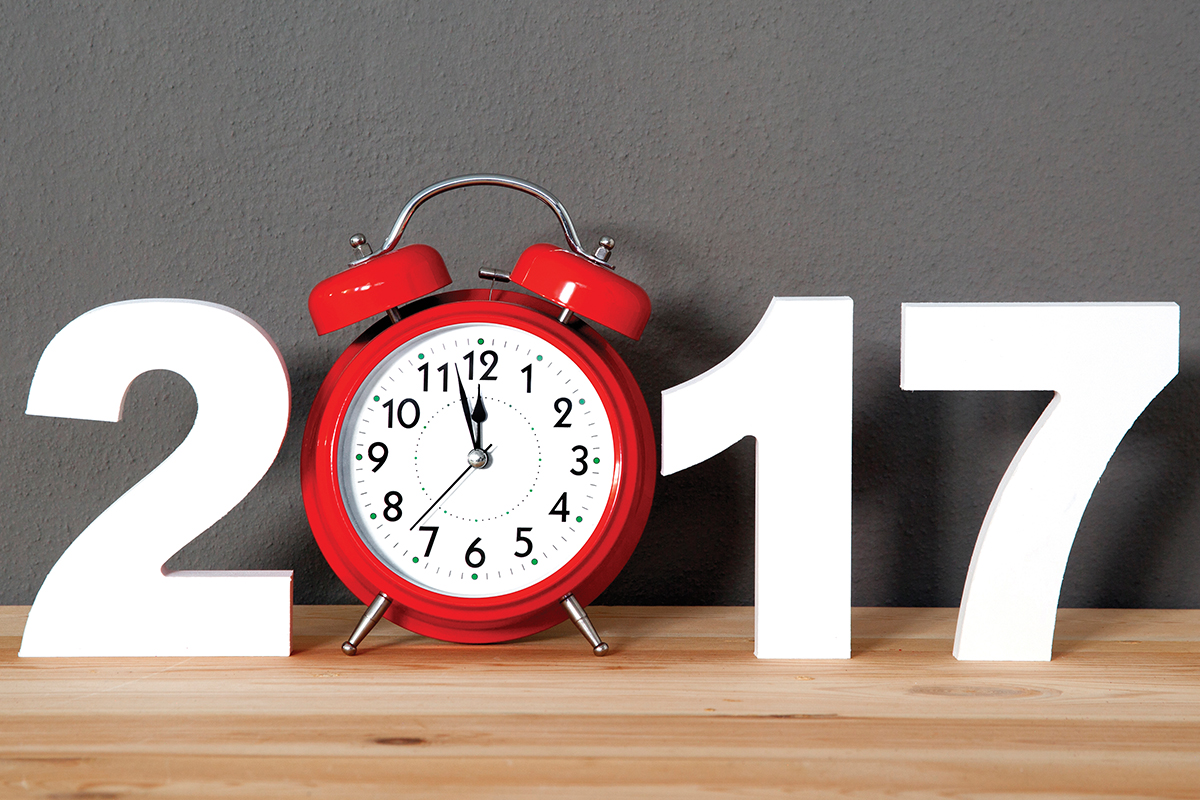 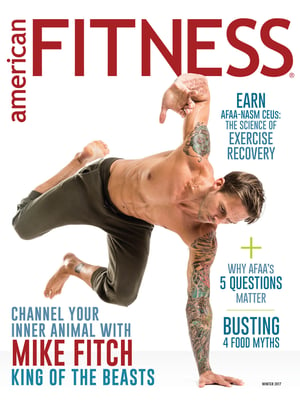 Originally appeared in the winter 2017 issue of American Fitness Magazine

As a new year dawns, thousands of people join health clubs with the intention of changing their lives. However, more than 40% of new exercisers cancel that membership within 4 months, and almost 70% terminate by the end of the first year (Nuviala et al. 2013). The most alarming aspect of this statistic is that it doesn’t change from one year to the next.

Do people simply give up…or is something else going on? To get to the root of the problem, we need to look at the body’s core and how it relates to injury prevention.

Injury is one of the best predictors of failure in an exercise program. It’s tough to stay focused and motivated when you’re hurting. A study published in Sports Medicine found that between 60% and 90% of exercise programs begun by sedentary individuals ended in injury within the first 6 weeks (Jones, Cowan & Knapik 1994). There are many speculations as to why injury rates are so high among new exercisers.

When excessive load and repetitive movements are placed on an unstable foundation, something eventually breaks. James Edward Gordon, a founder of biomechanics, stated that compression structures fail due to a lack of stability, not strength (1987).

To break the injury cycle for your clients—and maybe change the outcome of their resolutions this year—one of their first exercise goals should be this: building a solid, stable foundation. Here, we will look at the purpose of core stability, as well as exercises that can be done to assess stability and improve it in your clients.

All muscles have the ability to produce force, reduce force and stabilize joints. This occurs at all times, regardless of the movement. In a squat, for example, the knee is moving primarily in the sagittal plane while it is demonstrating stability in the frontal and transverse planes, and the core muscles are stabilizing the spine and pelvis.

More specifically, core stability has been defined by Kibler, Press and Sciascia (2006) as the ability to control the position and motion of the trunk over the pelvis to allow optimal production of force and motion. Furthermore, Barr, Griggs and Cadby state, “It has become clear that stability is a dynamic process that includes both static positions and controlled movement” (2005).

The Mechanics of Core Stabilization

Core stability has been a subject of study and discussion since the 1970s (Barr, Griggs & Cadby 2005). Core stabilization works by the contraction of deep muscles, which include the transverse abdominis (TVA), internal oblique, lumbar multifidus, diaphragm and pelvic floor. This contraction results in an increase in tension of the fascia of the lower back, as well as an increase in intra-abdominal pressure (Hodges 1999).

The tensioning of the fascia occurs because the TVA is oriented horizontally, resembling a corset. The diaphragm, pelvic floor, internal oblique and lumbar multifidus also contract in a coordinated fashion to increase internal pressure. When all these muscles are functioning optimally, they provide stability to each vertebra in the lumbar spine and stabilize the pelvis.

A common misconception regarding the core is that these muscles need to be “strong.” To put it bluntly, stabilizers don’t get strong because they are designed to be quick and demonstrate endurance. In fact, Barr et al. found that only a 10% maximal contraction was needed to properly stabilize the spine (2005).

Last, in a series of tests involving limb movement to determine why the TVA contracted first, Hodges found that the muscle was likely “preprogrammed” by the nervous system to do so (1999). Researchers came to this conclusion because contraction of the TVA occurred before the contraction of the muscle responsible for movement. Hodges concluded by suggesting the following about core stabilizers:

Ideally, core stabilizers should contract when needed without any conscious thought. However, in clients who are sedentary or are experiencing low back pain, these muscles may have to be taught to respond appropriately through core activation.

Hodges and Richardson first demonstrated the role of the TVA in stability (1996). After this, the search for the best ways to activate the muscle began. With the TVA being very deep, it is challenging to directly measure how or when it contracts. Nonetheless, Aroski et al. soon discovered that drawing the navel toward the spine—also called the drawing-in maneuver, see below—appeared to best activate the “inner unit” (2001).

Begin on the hands and knees with the back straight and the head in line with the spine. Pull the region just below the navel inward toward the spine while maintaining the cervical spine in a neutral position. (The action is similar to “sucking in” the stomach in when trying to button a pair of tight jeans.) This contracts the TVA bilaterally. Remind clients to breathe, rather than hold their breath, when performing this exercise. Hold for 15 seconds. Perform 10 repetitions. (NASM 2017) 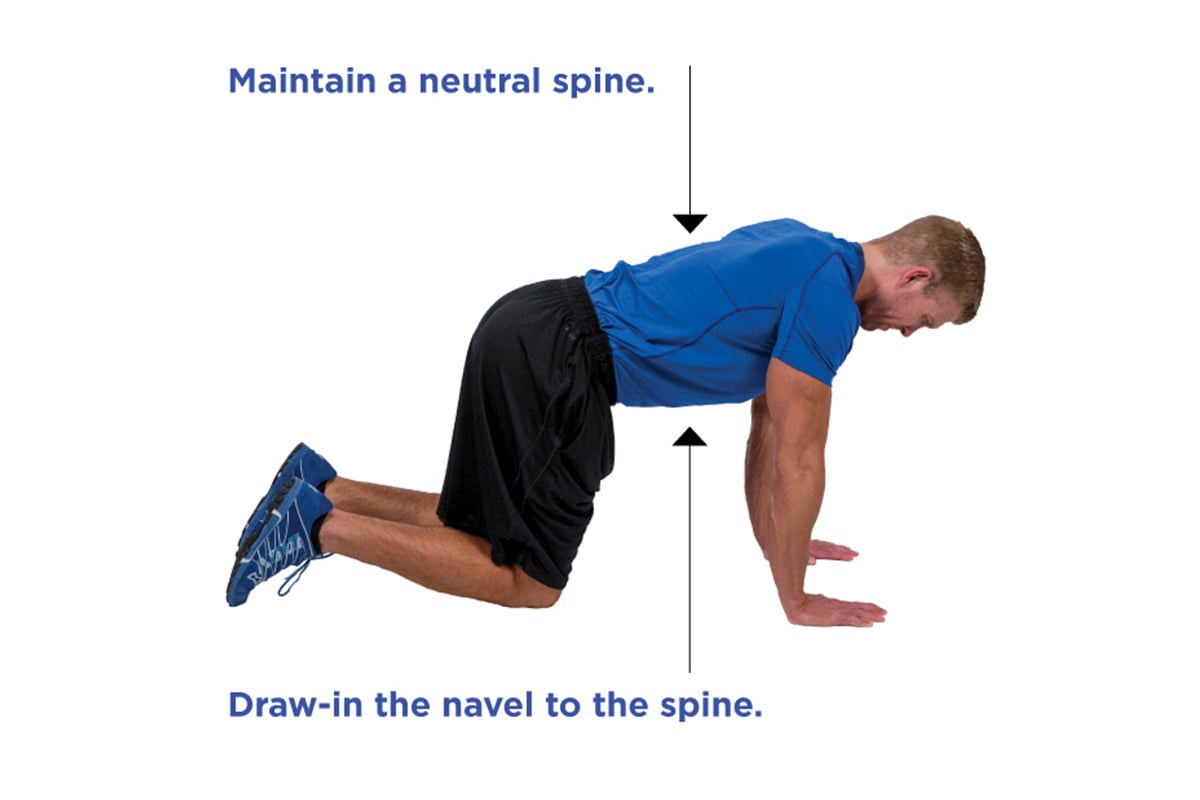 While this research does not suggest that everyone needs to draw-in, participants who demonstrate a lack of stability would likely benefit from actively engaging core stabilizers. The drawing-in maneuver can be done in any position, on its own or in concert with other exercises, including the core stabilization exercises that follow.

Clients should perform the following exercises as part of a warm-up, after flexibility. This will help get the core activated and ready for additional training.

Begin on the back with the knees bent and feet flat on the floor. Draw-in the navel to the spine. Then drive through the feet to press the pelvis toward the sky. Press up until the hips are in a neutral position. The spine and pelvis should also remain neutral. Pause for 2 seconds and then slowly lower the hips to the floor. Perform 12–20 repetitions. 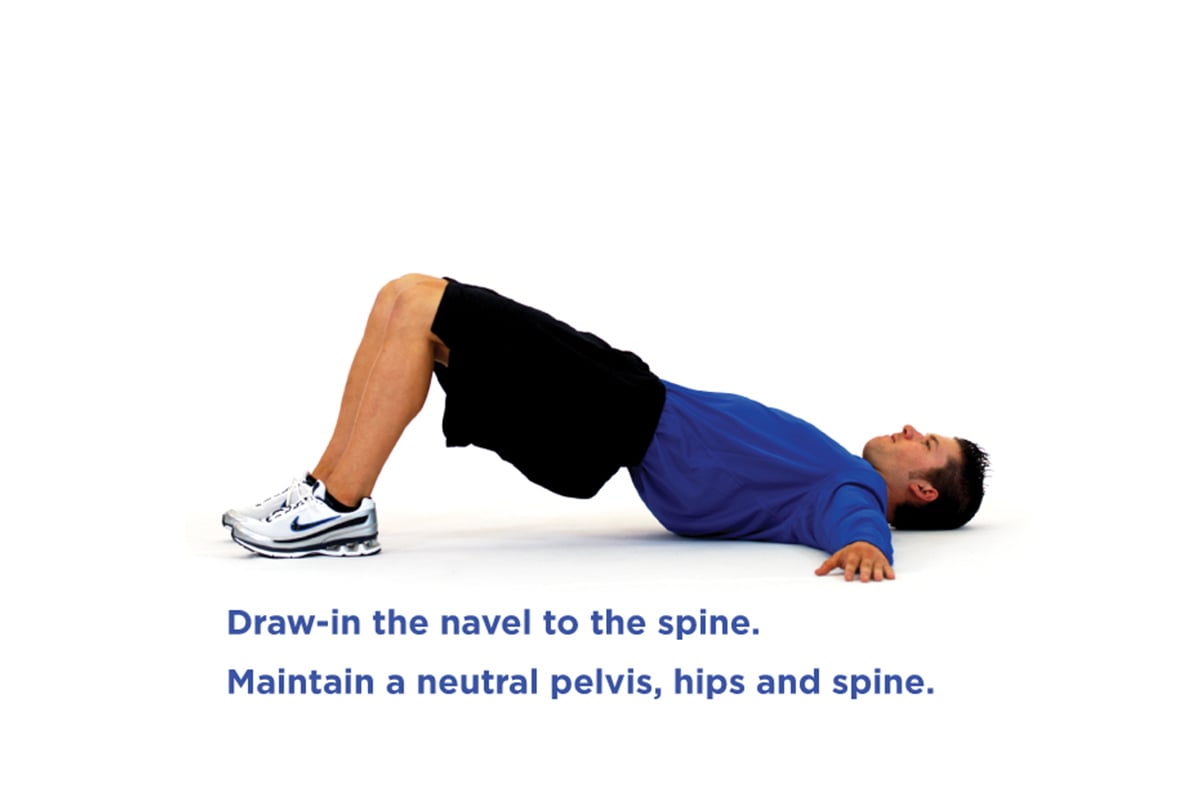 Begin face-down with body weight supported only by the forearms and toes on the floor. Draw-in the navel, maintaining a neutral cervical spine, and keep head in line with body. 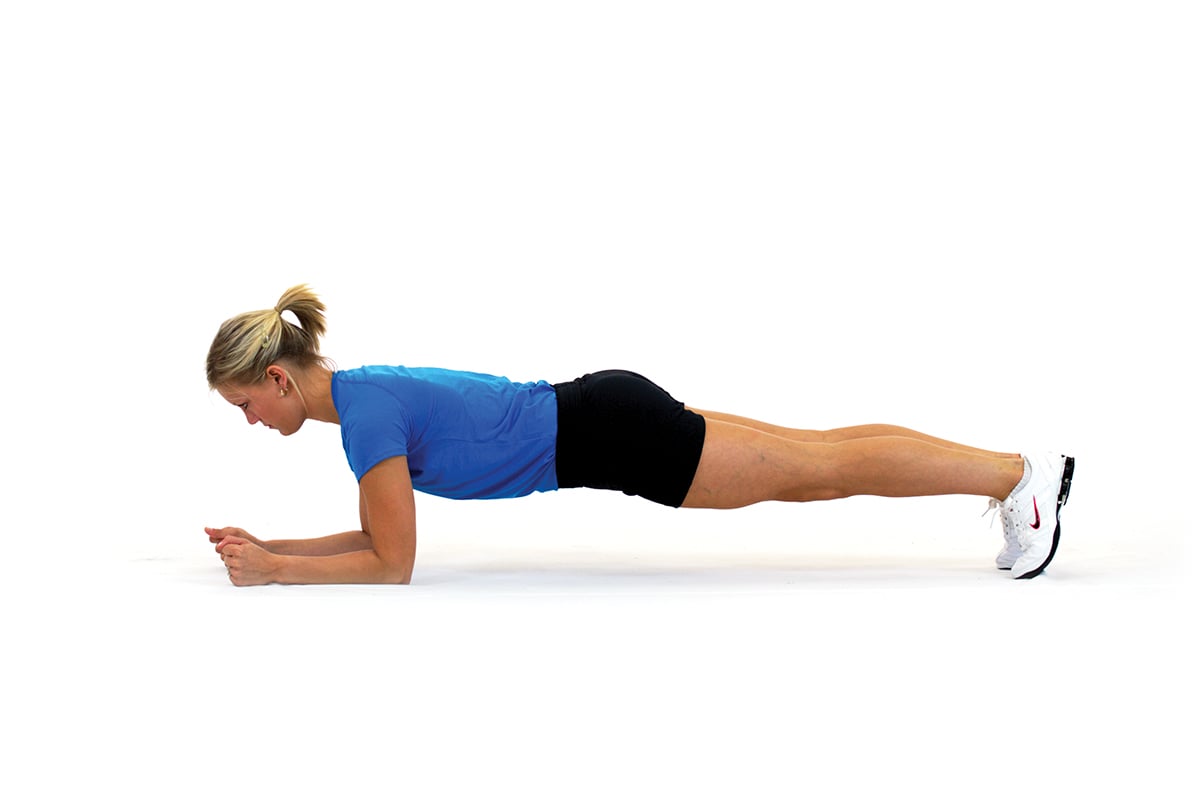 Clients should first learn to hold proper form for a short period of time (about 10 seconds). Have them perform 8–10 reps with a 3–4-second rest between reps. Slowly increase time and decrease reps, building up to 4 sets of about 30-second holds. 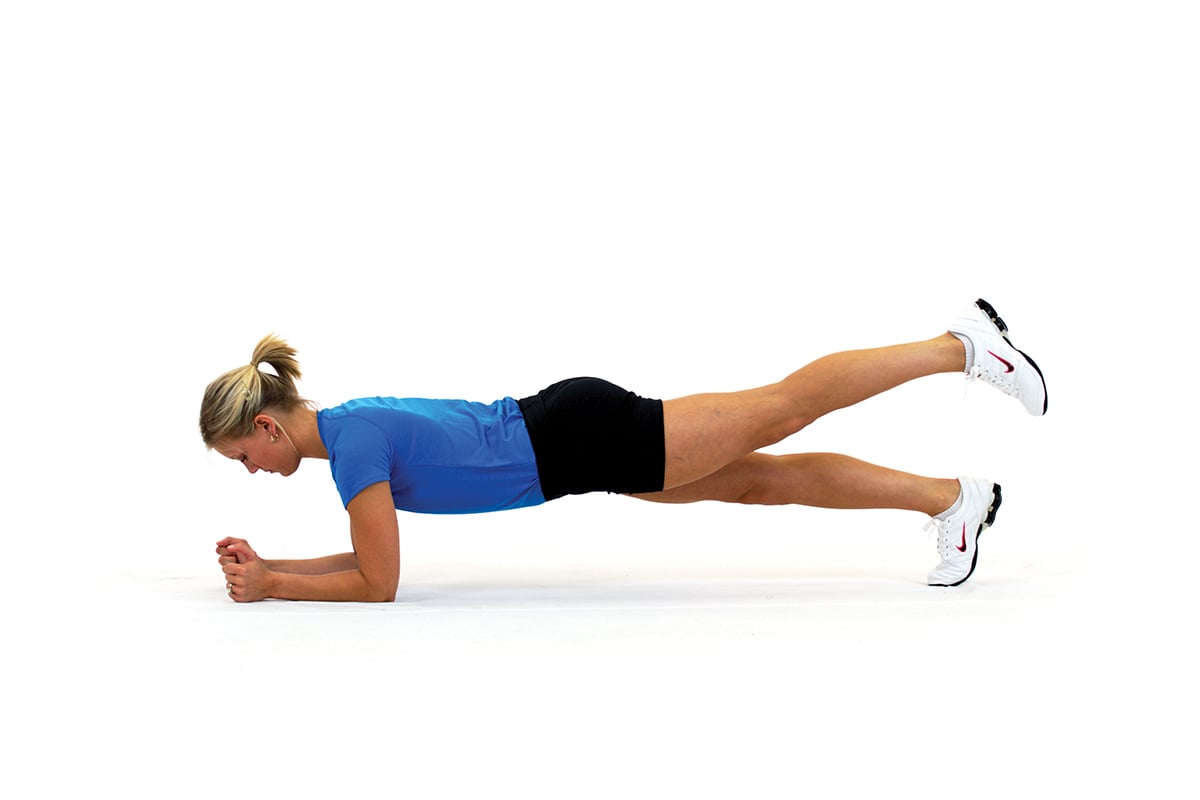 When a client can successfully do this, add in movements instead of additional time. A great drill to work on is lifting one foot. Lift foot high enough to extend the ankle, and hold for a few seconds. This shift from a four-point to a three-point stance will cause an increase in activity in the core stabilizers. The client may also reach for an object using one arm, keeping both toes on the floor, or they can decrease stability by leaning both forearms on a stability ball.

This exercise is designed to teach clients to perform a contralateral movement pattern with a neutral spine. Begin by performing the drawing-in maneuver, then reach one arm forward and the opposite leg back. The goal is not to reach high, but far. Tell the client to think of making yourself longer, reaching toward the opposite walls. Perform 12–20 reps, alternating sides. 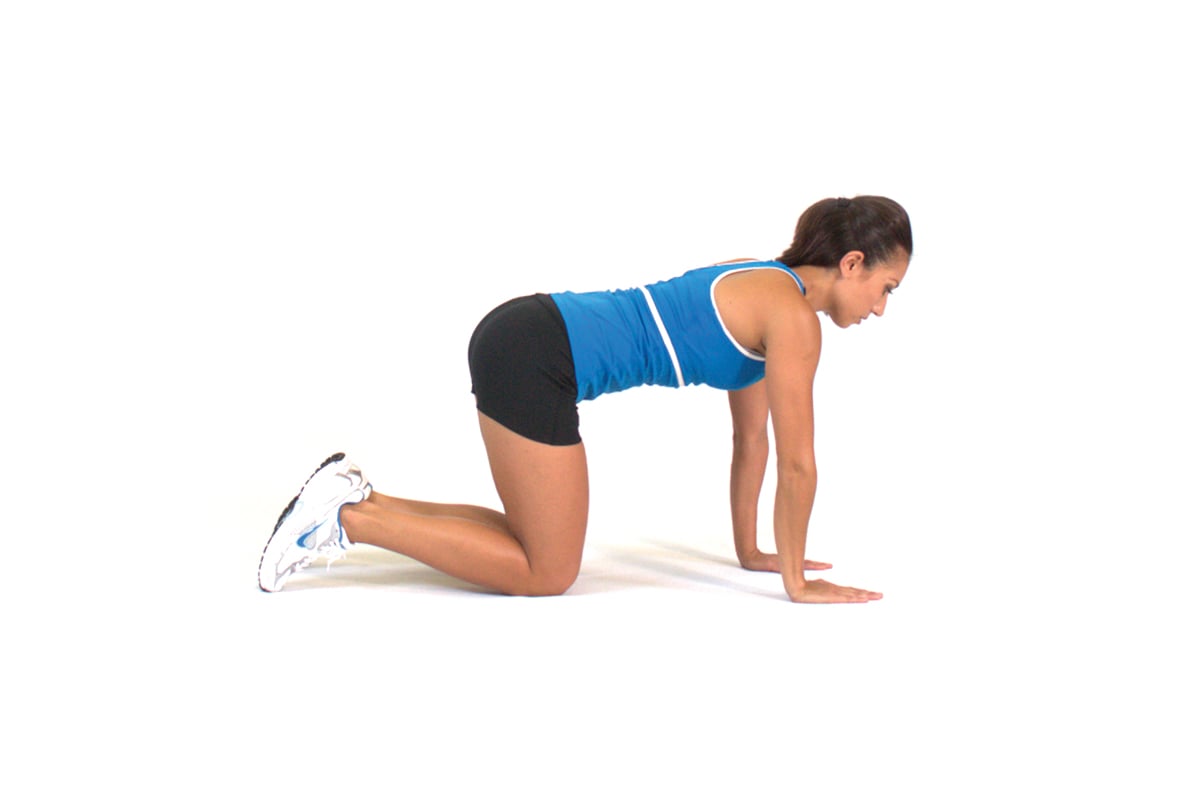 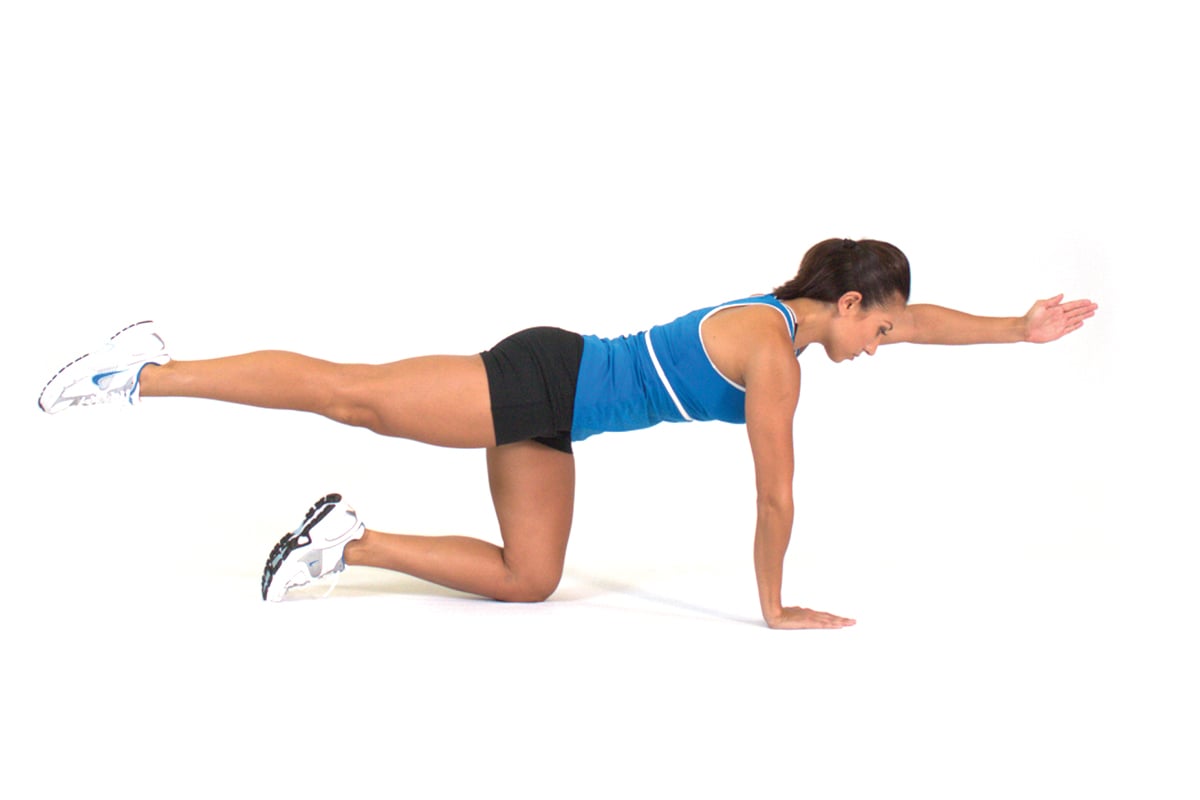 This exercise also teaches the client to stabilize the spine and pelvis while performing a contralateral movement. This may not be for beginners, as the client needs at least foundational levels of stability.

Begin by laying supine with the arms straight up. Bring the legs up, with the hips and knees bent to 90 degrees. Draw-in, then slowly reach one arm overhead and the opposite leg out without allowing the pelvis or spine to move.

If the client begins to feel this in their lower back or describes it as really “getting their lower abs,” then they are using too much psoas, and they need to regress by decreasing motion or substituting a different exercise. Perform 12–20 reps, alternating sides. 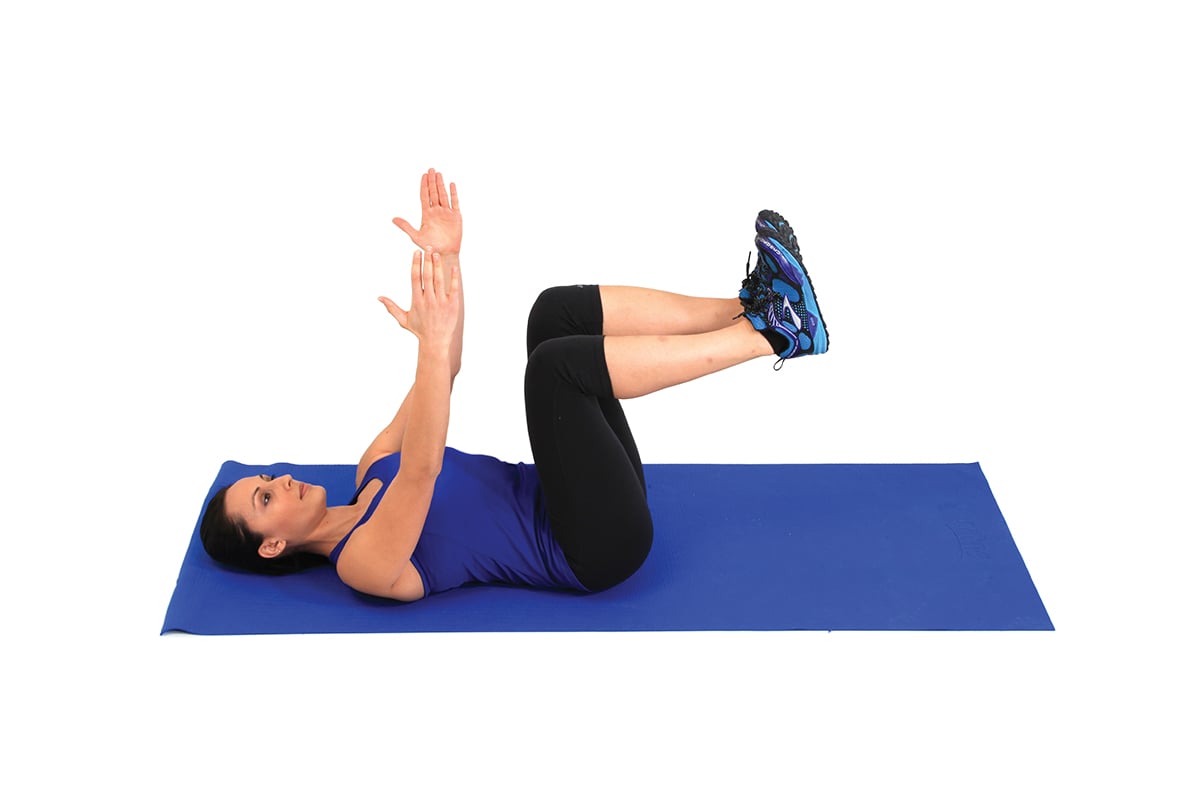 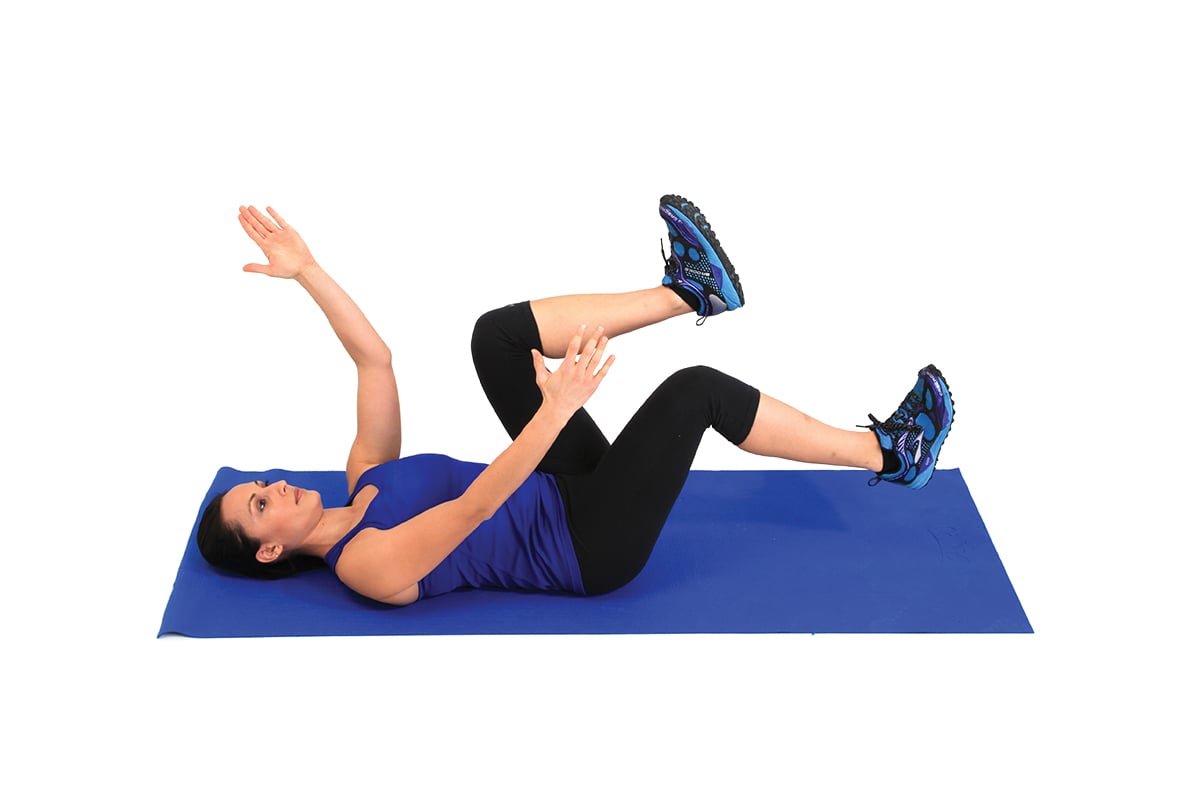 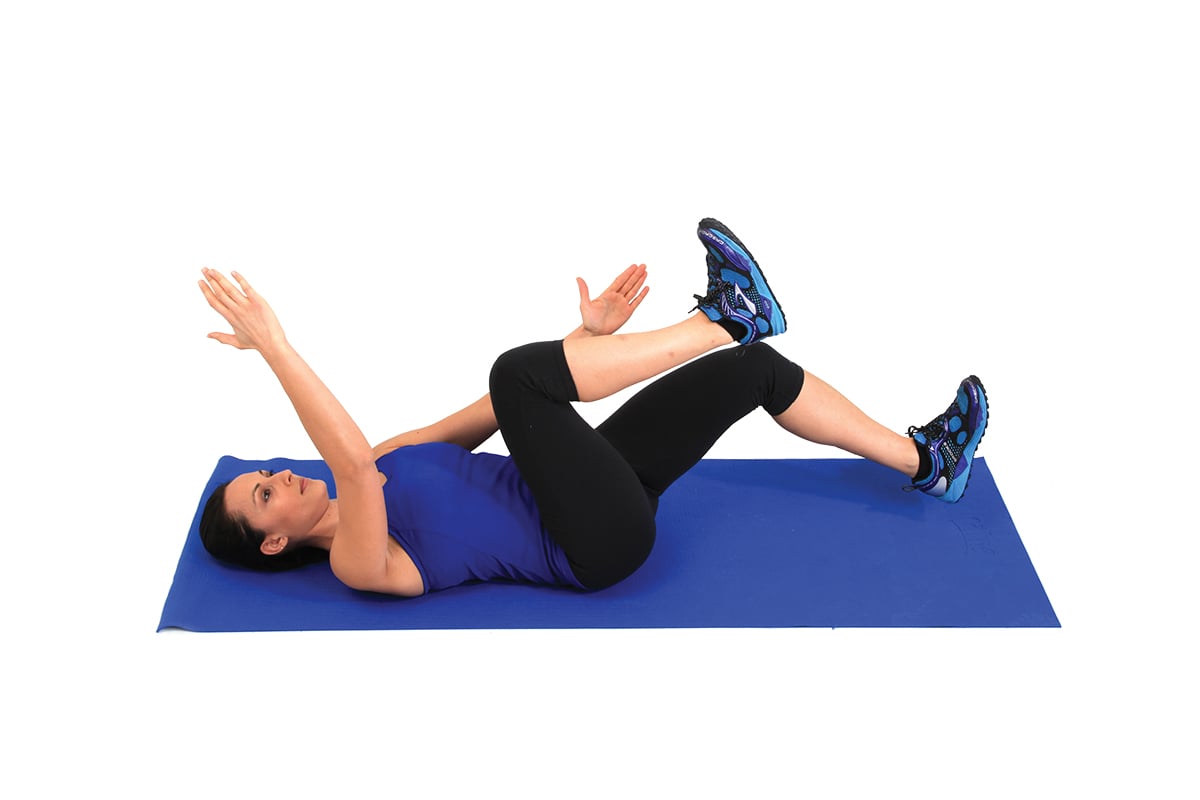 NEXT STEPS AFTER CORE WORK

This exercise teaches the client how to properly decelerate with a stable core. In addition, this integrates the new core activity into functional activities. Then move into resistance training using exercises that encourage the client to stabilize themselves. For example, instead of doing a seated chest press, have them perform a standing cable press. By standing, the client will be forced to engage their stabilizers, leading to even better core and hip stabilization.

The first 4–The first 4–6 weeks of exercise should utilize core stabilizer exercises; this is Phase 1 of NASM’s Optimum Performance Training (OPT™) model, Stabilization Endurance. Periodically remeasure with the overhead squat assessment (OHSA). If the assessment isn’t improving, then you may need to consider the exercises. If the assessment is getting better, then you know you’re on the right track, and after several weeks the client will be ready to move to the next phase!

A Solid Foundation for Trainers

Total-body improvement goals aren’t only for clients with New Year’s resolutions. For the past year, the National Academy of Sports Medicine has been updating, refining and, yes, improving upon our already valuable certified personal trainer program.

Today’s NASM-CPT program continues to provide essential information for aspiring and existing fitness professionals, with educational programming that prepares them to change the lives of others. While integrating the latest scientific research into our existing model of evidence-based education, this updated program offers additional materials that enable aspiring fitness pros to apply the principles of human movement science to everyday work with various client types in a wide variety of modalities.

Materials include real-world scenarios, easy-to-digest breakdowns of complex science, and repeated exposure to key concepts combined to make programming easier to apply to their business. Here is just one example of the applied science found in Module 9 of the NASM-CPT program. 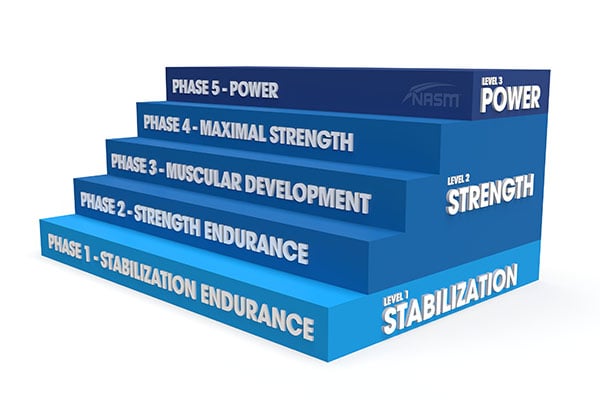 "Learn how to use the systematic and integrative Optimum Performance TrainingTM (OPTTM) model in the NASM Certified Personal Trainer program. Applicable for any client, any goal."

To develop the right program for a client, a fitness professional has to know how well the participant’s body is moving and stabilizing. Assessments help guide exercise programs and shed light on mobility and stability issues. There are several methods of performing assessments or screens, but a quick and effective tool is the overhead squat assessment (OHSA). The OHSA offers a snapshot of movement—including mobility of the ankle, knee, hip and shoulder—along with stabilization. When performing the OHSA, the following may be indicators of poor stability:

Movement is complex, and these compensations may have other root causes, such as inflexibility. However, fitness professionals will find that using assessments such as the OHSA is a great starting place to begin designing a program for clients.

In the NASM-CPT program, trainers will learn how to adapt the OHSA to further identify the causes for compensations such as these. For instance, if the client does the OHSA while standing with their hands on their hips and their heels on a length of 2-by-4-inch wood, an arched lower back may indicate that core weakness is the primary issue (NASM 2017). Using information such as this, fitness professionals can use science and assessments to develop effective training programs that meet the training needs of various client types, including those who lack core stability.

As part of the 16 modules, fitness professionals will have access to online reading material, an exercise library, predesigned workouts, and concise videos including lectures, introductory concepts and exercise techniques. Users also can access case studies, learning activities, quizzes and a practice exam. To learn more about the NASM-CPT program, go to www.nasm.org/cpt. AF

How To Meet, Sell, and Retain Clients, Part 2 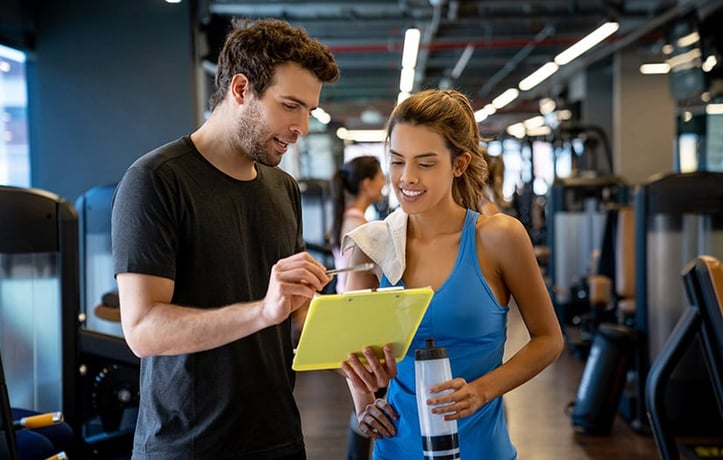 Five Ways to Get Your Clients to Listen to You! 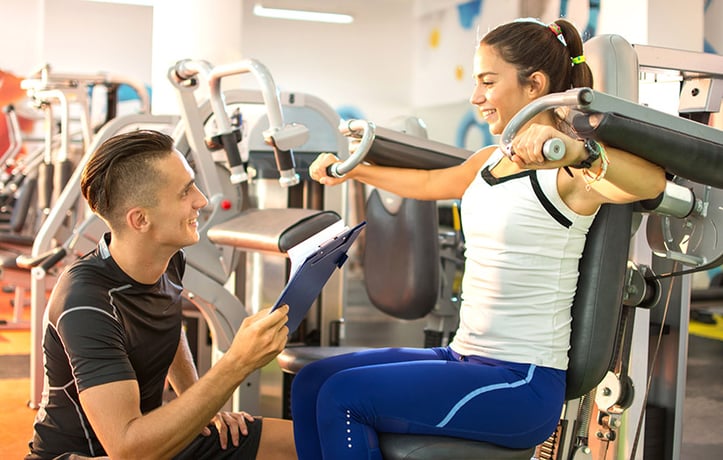 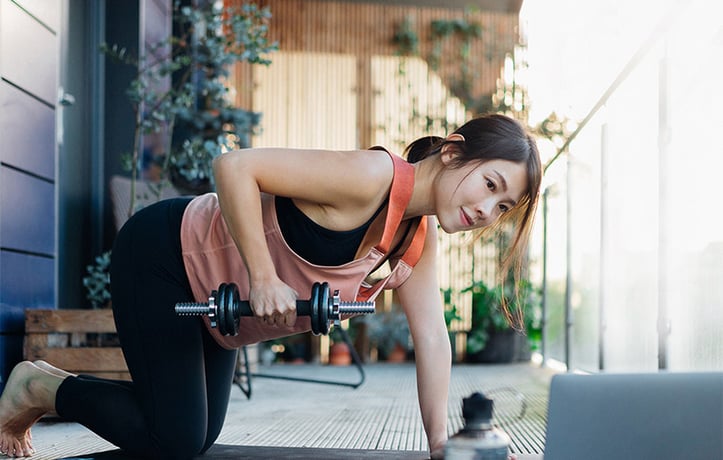 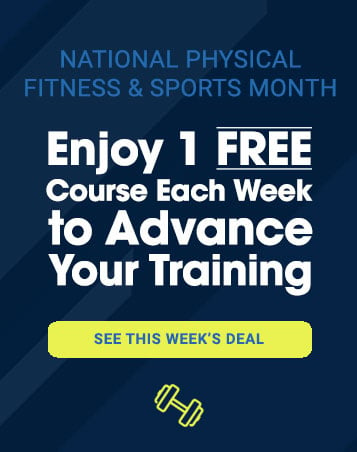