How to Really Get Six Pack Abs: 8 Exercises for Strength and Definition 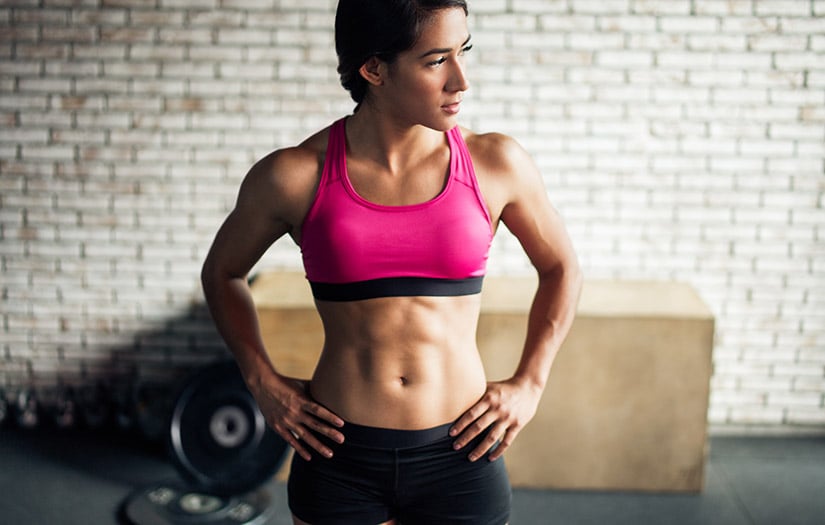 Ah, the elusive six-pack abs. You’ve seen them on the covers of magazines, on athletes, and perhaps even on people you know personally. Having a six-pack can undoubtedly look impressive from the outsider's perspective, but what you might not be able to see is the amount of intentional work that went into achieving that look and the consistent effort that it takes to maintain it. So, what does it take to get six-pack abs?

Not surprisingly, genetics do play a role in one’s ability to achieve a six-pack. Some people can achieve this look in a shorter amount of time than others simply because their body distributes fat and builds muscle. Not the case for most of us, unfortunately!

The majority of us will need to focus on maintaining nearly flawless nutrition, a consistent exercise routine, and sufficient sleep to obtain and keep six-pack abs.

Which Ab Muscles Should You Target for a Six Pack?

What muscle groups make up the “abs”? Our abdominal muscles serve a vital role in helping us to stabilize the lumbopelvic-hip complex, and keeping them strong is essential for anyone! When we see a six-pack on someone, we generally notice the portion of the abs called the rectus abdominis.

Even though this muscle creates the visible six-pack, it’s also important to train the other muscles that make up this functional muscle group.

This layer of abdominal muscle lies deep in the abdomen and is responsible for helping to stabilize the lumbopelvic hip complex. When you do a “drawing in maneuver” to stabilize your core, you’re activating the transverse abdominis. This muscle is like your very own built-in girdle!

You have internal and external obliques. The obliques work together to help you rotate, flex laterally, and even help you on regular crunches and stabilize the spine.

See How to Get Rid of Love Handles if you are curious about trimming down your waistline.

This muscle creates the six-pack look, but it also flexes the spine forward (for example, in a crunch or sit-up) and helps with lateral flexion as well.

8 Exercises for a Six Pack

The good news is that you don’t have to do 1,000 crunches a day to achieve this look. It’s better to have a more well-rounded core program for a healthier core, better-looking abs, and to keep you from getting bored.

Just like any exercise routine, it’s critical to build a solid base of fitness, starting with stabilization. Take 2-4 weeks to master these moves before progressing to the strength-level ab work. You can perform these ab exercises 3-4 days a week, but sufficient rest is vital for muscle building, just like any other muscle group.

Ab Movements for a Six Pack

There are countless ab movements out in the world, but here are a few to get you started:

Reps/Sets: Work up to holding the plank positions for 30-60 seconds, and perform 8-10 reps on each side for the pallof press and dead bug exercises. You can do 1-3 sets as you’re building your stamina!

Place your elbows underneath the shoulders and keep your forearms parallel (avoid clasping the hands together). You want your feet hip-width apart, and your body should be in a straight line from your head down to your ankles once you’re in the plank.

You can perform this with arms elevated on a surface to start or down on the ground for more of a challenge. Squeeze your abs and glutes as tightly as you can while you actively push away from the ground through your elbows. The plank should feel very active when it’s done right!

Lay on your side with your elbow right underneath your shoulder. Make sure your hips and shoulders are stacked as you raise the hips off of the ground. To start, you can do a kneeling side plank or just bend the bottom knee but keep the top leg straight.

The most challenging version is with both legs straight, feet stacked. Squeeze the abs and glutes as you keep your hips lifted so that your body is in a straight line.

Use a cable machine or a resistance band anchored to a pole at chest height. Start holding the handle close to your chest and stand so that the anchor is to your side. Squeeze your abs and glutes and stand tall with your feet hip-width apart. Press the handles straight out in front of you without rotating.

You can step farther away from the anchor to make this move more challenging if you’re using a band or add weight to a cable machine. Perform all reps on one side before switching.

Lie down on your back with your legs up in the air, bent at the knees, and your arms pointed straight up toward the ceiling. Press your back down into the mat like you’re squishing a bug underneath your back. Lower the opposite arm and leg toward the ground without letting your back arch.

If needed, start with just leg lowers until you build enough core strength to lower the arm and leg without arching. Hold for two seconds with the arm and leg extended, and slowly return to the starting position—alternate sides.

Reps/Sets: Perform 10-15 reps of each for 2-3 sets. Weight can be added to each of these as you get stronger and want more of a challenge!

Place the hands behind the head or across the chest and keep the chin tucked as you curl up to lift the shoulder blades off the floor. Think about leading with the sternum as you curl up.

This should make the movement feel much more difficult. Keep a moderate, controlled pace as you curl up and lower. Your abs should stay tight the entire duration of the movement.

Lie down on a bench and hold the bench behind your head. Bring your legs up into a tabletop position and pull your abs in so that the rib cage isn’t flaring out.

Lift the hips straight up and back slightly and lower down at the same pace that you lifted up. Keep the abs especially tight as you lower down for maximum benefit.

Hold the handle straight out in front of you and squeeze your abs and glutes. Exhale as you rotate away from the anchor. You can let the hips turn with you while pivoting the back foot.

Return to the starting position at the same speed, controlling the movement with your core. Perform all reps on one side before switching.

Hold a medicine ball or dumbbell with both hands. Start in a squat position with the weight outside of one knee. Stand and rotate, swinging the weight in a diagonal up and away from the knee.

Pivot the back foot at the top of the movement. Keep the abs tight and return to the starting position. Perform all reps on one side before switching.

Achieving a lean physique is necessary to see the six-pack abs that you’re building. A significant part of this equation is getting enough daily physical activity to create a calorie deficit. Ideally, you’ll want to perform at least 30-45 minutes of moderate cardio per day, most days of the week (not including resistance training).

Compound Movements for a Six pack

Compound moves often require an increased demand on the core to help stabilize the lumbopelvic hip complex, which helps to strengthen and tone the abs. Additionally, you can add rotation to moves like single arm cable rows or walking lunges with a medicine ball for an extra dose of core work in your workout.

There’s no “perfect diet” for any one person, but someone trying to get a six-pack will generally have a diet that includes meals that looks something like this: a serving of lean protein, at least half a plate of non-starchy veggies, one serving of healthy fat, and non-processed carbs limited to post-workout only.

Processed foods, desserts, or caloric beverages can be consumed once every 1-2 weeks, within reason.

How Long Does it Take to Get a Six Pack?

One benefit to achieving six-pack abs is a low body fat percentage, a nutritious diet, and regular exercise. There is a potential for imbalanced training if there’s too much focus on ab work and not enough back strengthening to balance out the core. This could lead to movement dysfunction if not addressed in the exercise routine.

How Much Body Fat To Achieve a Six Pack?

Working hard to get a six-pack is attainable but a challenge! It will require planning, dedication, and it may put a damper on your social life due to the time demands of working out nearly every day and avoiding unhealthy food and drink. Now that you know what it takes to get six-pack abs, you can decide if it’s the right fitness goal for you!

Is a six pack worth it? Only you can answer that question. There’s nothing wrong with having a physique goal that’s challenging and will require sustained focus, even if it’s only maintained for a season to say that you accomplished the goal!

Once you have a better idea of what it will take to attain the goal of getting six-pack abs, you can decide whether or not it’s the right goal for you.