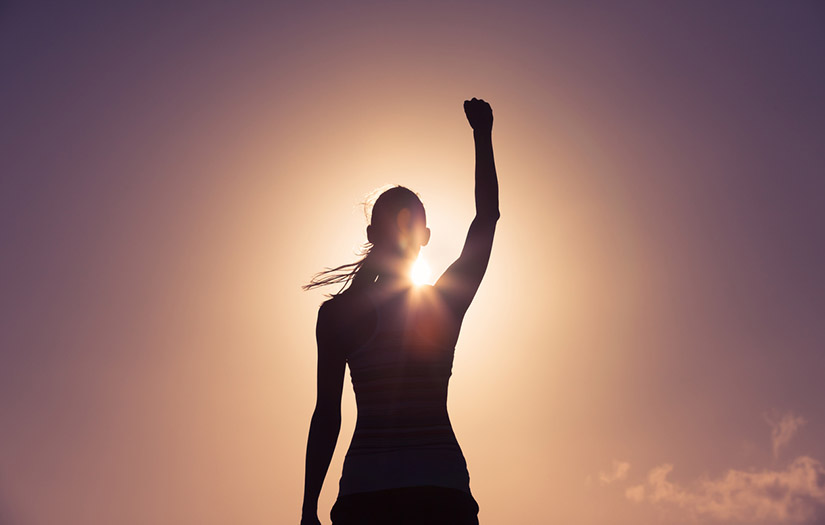 Similarly, it is important to note that appropriate nutrition programs prescribed for female strength athletes will differ from those of their male counterparts due to differences in exercise metabolism (Volek et al., 2006). This paper seeks to examine whether it is necessary for a resistance trained female athlete to consume a hypercaloric diet to successfully increase skeletal muscle mass.

Find more subjects like this within the NASM Women's Fitness Program. Check it out to learn even more!

• Increasing skeletal muscle is easier in obese sedentary subjects than athletes. This may be due to a more pronounced response of muscle tissue stimulation as well as the presence of additional energy reserves from excess adipose tissue.

• Female athletes will have less skeletal muscle hypertrophy over time due to hormonal and size differences from their male counterparts, however, general nutrition and training recommendations to maximize muscle development remain the same between both genders.

• It is beneficial to recommend a slight caloric surplus (precise amounts are not well- validated) with adequate protein consumption coupled with an appropriate periodized strength training program to maximize skeletal muscle hypertrophy in female athletes. Practitioners should start with a small surplus to avoid excessive gains in fat tissue.

Typically, type II muscle fibers (fast-twitch) have a greater capacity for hypertrophy than type I fibers and respond well to heavier loads. However, this process is highly variable depending on the individual’s genetics, hormonal environment, nutrition status (specifically what amounts of carbohydrates (CHO), fats (FAT), and protein (PRO) are consumed and how the body allocates them), and training protocols (Slater et al., 2019).

Muscle protein synthesis (MPS) requires a positive nitrogen balance for optimal repair and hypertrophy of muscle tissue stimulated by resistance training. It is well established that a negative energy balance can compromise this process to some degree, though there are instances, especially in untrained individuals, where muscle hypertrophy is possible in a negative energy balance. The ingestion of high biologic value protein within 48 hours of completing resistance training aids in this process (Volek et al., 2006).

Overfeeding generally results in body mass increases in the form of both lean body mass (LBM) and fat mass. Ribeiro et al. (2019) conducted a small pilot study with a cohort of 11 trained body builders (n=11) to determine if higher energy consumption would lead to greater gains in LBM. Group 1 (G1) was placed on a moderate eucaloric diet while group 2 (G2) was given a calorie surplus. All participants were placed on a 4-week strength training regimen similar in both volume and frequency.

The participants in G2 gained significantly more muscle mass and fat mass compared to the participants in G1. As a result, the researchers concluded that in trained bodybuilders, induction of a calorie surplus during a heavy resistance training regimen leads to greater gains in lean body mass (Ribeiro et al., 2019).

Spillane and Willoughby (2016) overfed a cohort of resistance trained male athletes for a period of 56 days. The participants were assigned to a high carbohydrate (HC) or high carbohydrate and high protein (HCP) protocol though the caloric surplus (approximately 1,250 kcal daily) was the same for both groups. Both groups achieved increases in LBM and total body mass; however, neither group attained a more favorable body composition than the other. The researchers concluded that once adequate PRO requirements are met, there is not necessarily an advantage to additional PRO intake for increased MPS.

Overall, it is important to note that caloric surplus in resistance trained athletes will lead to increases in both LBM and FM. Adequate PRO is necessary, though there is a point of diminishing returns with excess PRO intake (greater than 2.2 g/kg of BW per day). Likewise, accretion of skeletal muscle in already lean resistance trained athletes while in a significant caloric deficit is extremely difficult to achieve—even with sufficient PRO consumption due to the energy demands of other metabolic processes involved skeletal muscle hypertrophy (Slater et al., 2019).

It is important to note the physiology of a female athlete with regards to MPS and skeletal muscle hypertrophy as well as various metabolic processes differs slightly between male and female athletes. A great deal of difference in skeletal muscle development in males and females is due to body size and LBM/FM ratios, however, there are some differences in substrate utilization too.

For example, females will demonstrate lower glycogen utilization than their male counterparts during high intensity exercise but will have higher levels of intramuscular triglycerides than males and will rely more on fatty acid oxidation for a fuel source during exercise. (Volek et al., 2006). Therefore, males have the capability of producing stronger and faster contractions and have large muscle fibers at baseline. This allows for a greater potential for muscle hypertrophy overall.

Additionally, though estrogen is an anabolic hormone that can aid in muscle repair, testosterone is a much more potent anabolic hormone. Higher baseline testosterone levels in males will lead to more substantial skeletal muscle hypertrophy (Haizlip et al., 2015). Nutrition recommendation with regards to maximizing MPS and skeletal muscle hypertrophy remain the same for both male and female athletes despite slight differences (Kerksick et al., 2017).

Skeletal Muscle Hypertrophy in a Calorie Deficit: Is it Possible?

Skeletal muscle hypertrophy is possible in obese sedentary individuals with the initiation of a resistance training program even in significant calorie deficit. Donnelly et al. (1993) conducted a randomized controlled trial with 14 obese females placed on an 800 kcal/day liquid diet for a period of 90 days.

The control group did not perform any resistance training while the intervention group completed a supervised resistance training regimen. The researchers found the intervention group lost a similar amount of absolute body mass as the control group, however, skeletal muscle mass increased. The investigators concluded skeletal muscle hypertrophy is possible in a severely hypocaloric diet in obese, previously sedentary individuals (Donnelly et al., 1993).

It is well documented high protein diets coupled with resistance training will preserve lean mass, especially in obese individuals adhering to a weight loss program. Sardeli et al. (2018) conducted a meta-analysis of previous studies investigating whether resistance training coupled with caloric restriction can preserve and/or lead to an increase in LBM despite a caloric deficit.

The researchers determined that resistance training coupled with caloric restriction will often result in near full maintenance of LBM and a significant loss of fat mass (Sardeli et al., 2018). This phenomenon is also described in body builders during competition preparation. However, it is extremely difficult for an already lean bodybuilder to gain LBM during a period of caloric restriction (Helms et al., 2014).

Conversely, it is theorized that increased stores of adipose tissue augment the metabolic response to caloric deficit. Individuals with these higher stores will tend to gain more FFM than a leaner individual following the same feeding protocols (Bouchard et al., 2013). This phenomenon may explain why it is possible for an obese individual to accrue skeletal muscle mass while in a caloric deficit, while the opposite does not hold true for leaner athletes.

General recommendations can be obtained from recent research regarding optimizing nutrition programming for skeletal muscle hypertrophy in resistance trained female athletes though specific protocols are not well-validated. To maximize skeletal muscle hypertrophy in trained female athletes anathletes an appropriately periodized resistance training regimen should be followed coupled with a nutrition plan incorporating adequate intake of PRO (1.6 to 2.2 g/kg of BW daily) and a slight caloric surplus.

The OPT model specifies that a macrocycle including phases of stabilization endurance, strength endurance, hypertrophy protocols with maximum strength periods included in the training plan will maximize muscle hypertrophy. This allows for training periods that will prepare the client for high volumes of muscular stress as well as maximized neuromuscular control and adequate recovery (Clark et al., 2014).

While it is possible for an obese and previously sedentary individual to accrue skeletal muscle mass while in a caloric deficit, this does not seem to hold true for an already lean and well-conditioned individual. Overall, specific research regarding the rate of skeletal muscle hypertrophy in resistance trained female athletes, while in a calorie deficit, is not widely available at this time, buttime but would be an interesting topic for future research.

Nicole Golden is a NASM Master Trainer, CES, BCS, FNS and AFAA-Primary Group Exercise Instructor and graduate student at Concordia University Chicago. She has been a health/fitness professional since 2014 when she left the field of education to pursue a full-time career in fitness. Nicole is the owner of FWF Wellness where she specializes in corrective exercise and weight loss coaching. She has a great deal of experience working with Bariatric patients and cancer patients/cancer survivors. She also has a special interest in coaching clients within the drug and alcohol recovery community. Nicole enjoys spending time with her husband and five children when she is not training clients or teaching fitness classes. 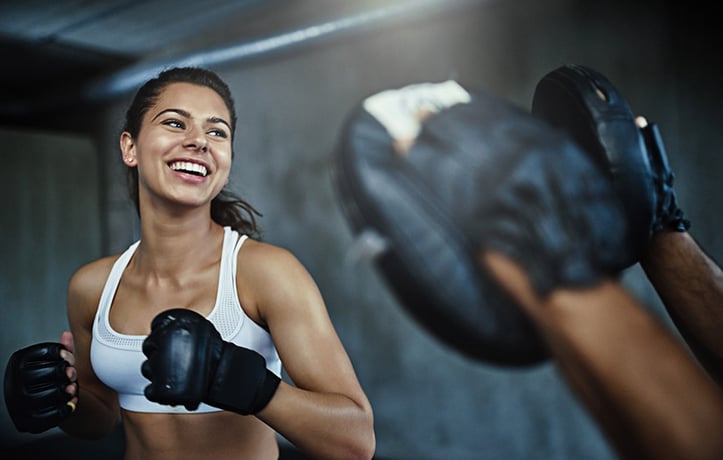 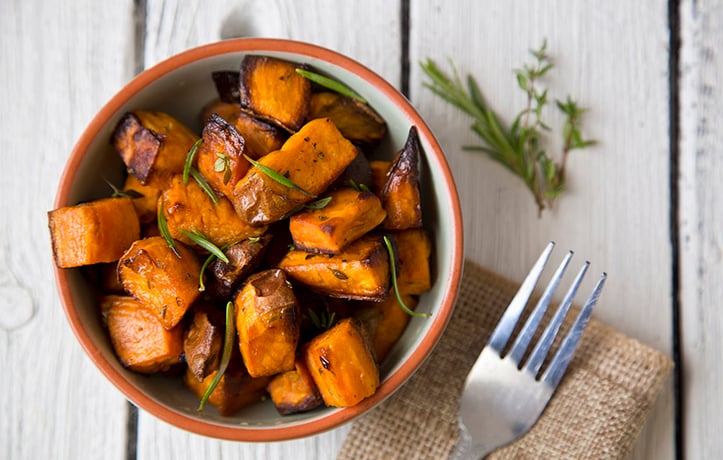 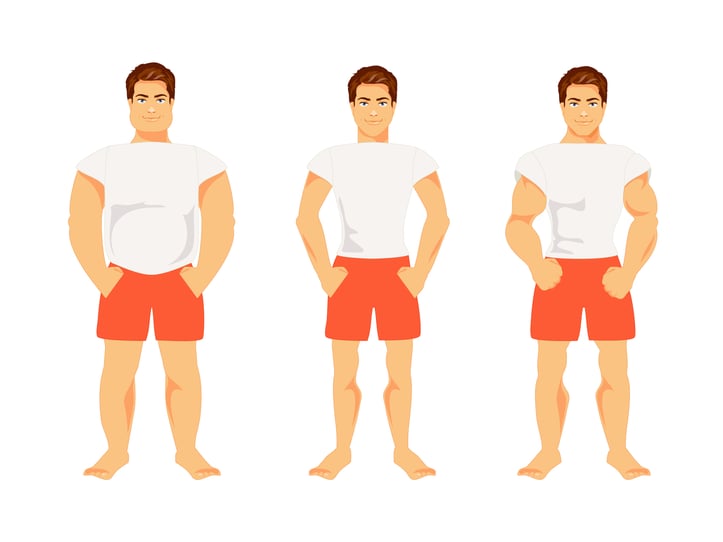