How to Use a Foam Roller 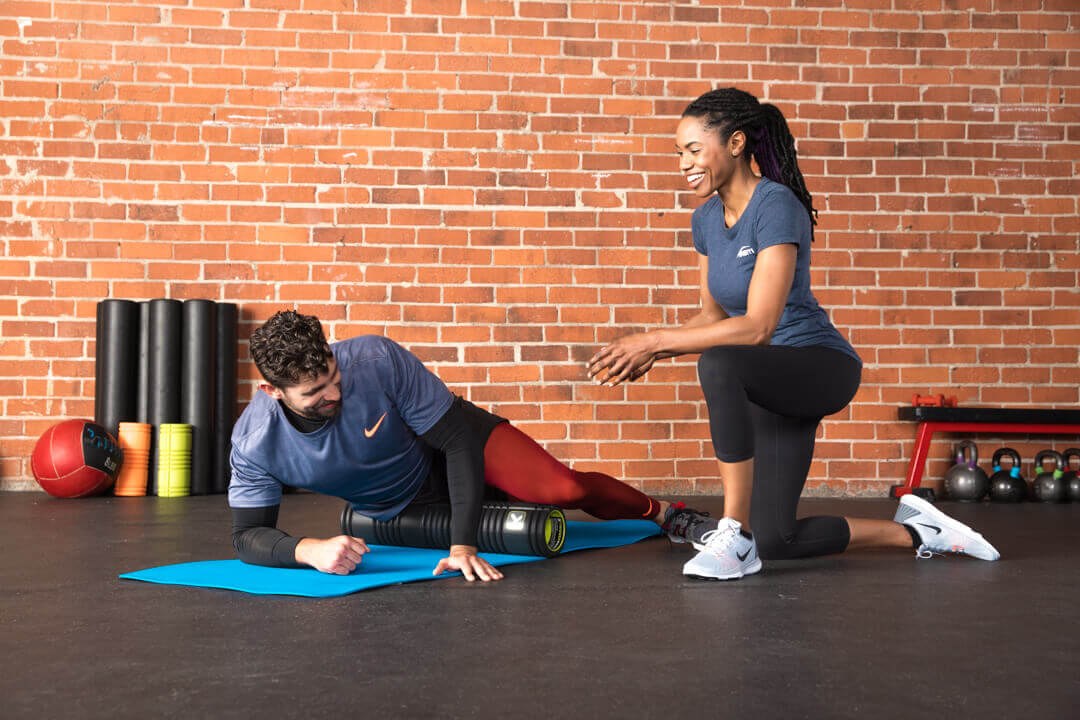 The foam rolling market has exploded with rollers that have different shapes, densities, textures, and designs. Foam rolling is a self-myofascial release technique that is commonly used by Corrective Exercise Specialists. It wasn’t until just recently that Mobility/Myofascial devices fell out of the Top 20 Fitness Trends (Thompson, 2019). Such popularity has spurred the manufacturing industry to design rollers for all occasions.

A common theme with many rollers (of course, not all) is that they are indented. However, to capture all myofascial devices, one description of foam rolling that has recently emerged is “…a type of self or assisted massage that uses a device to manipulate the skin, myofascial, muscle, and tendons by direct compression” (Cheatham & Stull, 2018, p. 765). The authors noted that this is a “work in progress” and the description is not an attempt to describe what is occurring physiologically.

Foam rolling is used for two primary reasons: 1) to affect local myofascial tissue dysfunction, and 2) to influence the autonomic nervous system (Clark, Lucett, & Sutton, 2014). Thus, foam rolling has both a mechanical effect on the local tissue and a more global, neurophysiological effect.

The direct pressure from the roller is thought to change the properties of the local tissue by reducing viscosity, breaking up myofascial restrictions, increasing hydration, and lowering the cellular response (Behm & Wilke, 2019; Kelly & Beardsley, 2016). Such local changes will affect the tissue by improving its ability to elongate and to respond to other mechanical forces. This demonstrates improved flexibility and mobility.

Neurophysiology is a branch of science that refers to the study of the functioning of the nervous system. Numerous studies have supported that direct roller pressure enhances stretch tolerance by influencing central nervous system (CNS) input from mechanoreceptor stimulation (Behm & Wilke, 2019; Cavanaugh et al., 2017; Cheatham & Kolber, 2017). Direct and sustained pressure from the roller will stimulate mechanoreceptors, which decrease tension and tone to overactive myofascial tissue.

The proposed mechanical and neurophysiological effects of foam rolling bring to light the importance of pressure.

The amount of pressure exerted by a foam roller is the product of its diameter and density. A harder, smaller foam roller will exert more pressure per square inch than a larger softer tool. This effect was demonstrated by Curran, Fiore, and Crisco (2008) as they measured increased pressure with a small rigid roller when compared to a larger, traditional compressed foam roller. However, it’s worth noting that the increased pressure did not lead to improvements in mobility (Curran et al., 2008). This is contrary to popular belief that a denser roller, which elicits more pressure, will lead to improved results.

Studies have shown that soft to moderate rollers may achieve better overall results (Cheatham & Stull, 2018). The researchers found that harder rollers increased the perception of pain with only minimal increases in mobility, thus having a negative neurophysiological effect. The medium density roller used in the study was found to have the best improvements in mobility and decreased the perception of pain. These findings support that personal preference is likely the most crucial consideration when it comes to choosing a foam roller – the most beneficial roller is the one an individual will use.

Given the available evidence, a foam rolling program should consider the factors mentioned above, along with the overall length of time and frequency of rolling.

The optimal duration of time to foam roll is variable with survey respondents stating they usually have users roll for a total of 5-10 minutes (Cheatham, 2018). This time included rolling each muscle group between 30-seconds and 2-minutes. Numerous studies have supported this notion of rolling for approximately two minutes to achieve a positive result (Cheatham et al., 2017; Cheatham & Stull, 2018; Cheatham & Stull, 2019). Therefore, the two-step approach should take approximately 2-minutes, total time, to roll each muscle group. This includes about 60 seconds of holding pressure and 30-seconds or so of active movements, which will be discussed in a later section.

The last component of practical application guidelines to be addressed here is the question of, “how often should someone foam roll?” Like many foam rolling studies, the evidence to answer this question is variable. Boguszewski, Falkowska, Adamczyk, and Białoszewski (2017) found that foam rolling just two times per week for four weeks improved functional movement patterns. Also, Bushell, Dawson, and Webster (2015) have shown that rolling five times in just seven days improved hip extension in a functional lunge pattern. Thus, foam rolling between two and five times per week may enough to experience at least some positive results. However, given the available evidence, there is no reason to believe that foam rolling cannot be used on most days of the week.

How to Use a Foam Roller in 2 steps

The application guidelines will address foam rolling technique, length of time to foam roll, and frequency of foam rolling for the best results.

There is currently not one optimal foam rolling program that has been identified in the existing literature (Cheatham, Kolber, & Cain, 2015). However, impactful foam rolling programs should address both the nervous system and mechanical changes. Thus, a two-step approach is recommended:

1. Appeal to the nervous system and reduce overall tension

The first step is to induce neurophysiological changes by reducing tension and overactivity in a targeted muscle. To do this, the user should roll the targeted muscle slowly to identify a sore spot and hold pressure. During this time, the user needs to simply keep direct pressure without rocking back-and-forth or attempting to knead the tissue. Hold, breathe, and relax for between 30 – 60 seconds, or until a reduction in discomfort is felt. While holding, the user can apply as much pressure into the roller as they feel comfortable with, but pain is not the goal, and the muscle must stay relaxed. It is more important to relax and breathe than to apply heavy pressure to the point that relaxation is no longer possible.

2. Appeal to the mechanical side and introduce tissue movement

Once there has been a reduction in tension, the next step is to induce mechanical changes by introducing active movements. Active movements involve moving the limb on the foam roller. Cheatham and Stull (2018) have shown that performing knee flexion movements while pressure was applied to the quadriceps produced greater knee flexion mobility compared to no knee flexion. In another recent study, Cheatham, Stull, Batts, & Ambler-Wright (2019) found that performing hip flexion and abduction/adduction movements while pressure was applied to gluteal/piriformis also lead to improved hip mobility.

Though these are the only two studies that have included active movements, one can infer that active movement while rolling any muscle group may be better than not including active movements. Examples of other movements while foam rolling may include dorsiflexion, rolling the calves, and shoulder flexion while rolling the latissimus dorsi. Further, movements such as cross friction, which is sliding the muscle side-to-side across a stationary foam roller, may also have beneficial effects. Although no specific recommendations currently exist, performing four to six active movements at a controlled tempo is generally easy to remember and execute.

To summarize, while foam rolling, the user should:

Foam rolling is an effective mobility strategy with numerous studies supporting and promoting benefits. The lack of consistent methods and programs used in these studies has led to confusion about how to roll. Research on best rolling strategies is still emerging. However, at this time, we do have a handful of studies with sound methods in which we can base optimal rolling programs. Following the recommendations here will help you and your clients move several steps closer to an evidence-based foam rolling practice.