4 IT Band Exercises to Reduce Risk Factors and Symptoms 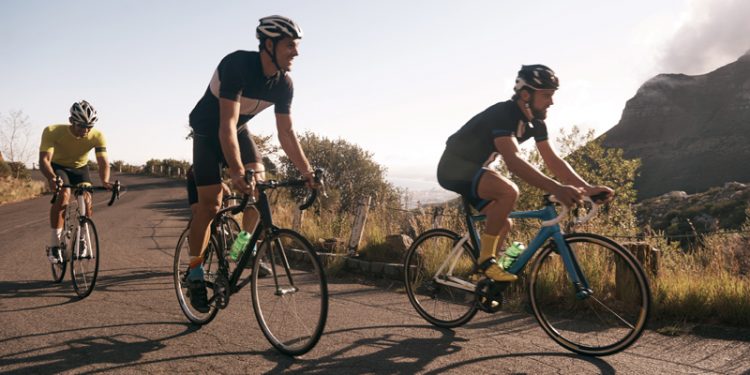 The warm summer weather is the perfect setting for people to get outdoors and participate in the activities they enjoy. However, too much of a good thing can lead to overuse injuries. Iliotibial band syndrome, or IT band syndrome, is one of these injuries.

IT Band Syndrome Statistics in Athletes

IT band syndrome is a common injury that occurs with the athletic population that accounts for:

Corrective Exercise programming can greatly benefit those at risk for IT band Syndrome.

What is the IT Band? 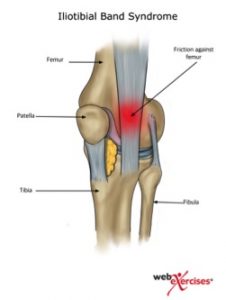 The iliotibial band (IT band), or Maissiat’s band, is a thin band of connective tissue (fascia) that extends from the pelvis through the tensor fascia latae and gluteal muscles to the shinbone.

What is IT Band Syndrome?

Iliotibial band syndrome occurs when the connective tissue (fascia) along the pelvic bone and shinbone becomes too tight and rubs against the thighbone (femur), causing pain in the knee and/or hip.

Signs and Symptoms of IT Band Snydrome

People who experience IT band syndrome typically complain of sharp or burning pain just above the joint line on the outside of the knee. The pain is generally worse at the beginning of exercise and tends to lessen as the muscles warm up, however, if the activity continues then the pain will worsen and could potentially halt the activity. Pain is also most noticeable when running downhill or just after the heel strike phase of the gait cycle. (6)

Causes of IT Band Syndrome

Several factors may contribute to the onset of IT band syndrome. Distance runners and cyclists are especially at risk.

A runner who increases mileage too fast, or a cyclist who has the bicycle seat too high or too far back will put unnecessary excess tension on the IT band, leading to injury.

Although there is some debate in the literature in regards to the exact mechanism of IT band syndrome as to whether it is caused by weakness of the gluteal muscles or due to overuse and subsequent pain causing motor control changes, the one thing that is clear is that exercise is essential for a resolution of symptoms.

This is demonstrated in several studies showing a 90% resolution with conservative care consisting of corrective exercise (12).

An effective yet simple exercise to begin with is the hip bridge utilizing a resistance band. Researchers Choi and colleagues found that gluteus maximus EMG activity was significantly greater while anterior pelvic tilt angle was significantly lower in the glute bridge with isometric hip abduction compared to the glute bridge without the band. Therefore, they concluded that performing glute bridges with isometric hip abduction against isometric elastic resistance can be used to increase gluteus maximus EMG activity and reduce anterior pelvic tilt during the exercise. (13) 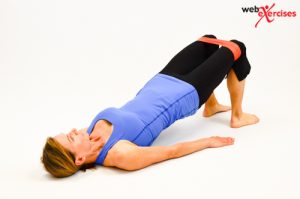 The Side Lying Hip Abduction is a great way to isolate the glute medius. Distefano and colleagues looked at gluteal activation among common exercises and identified this as one of the top exercises. (14) 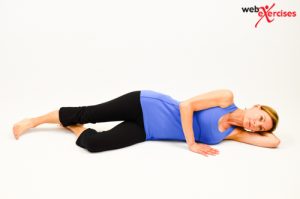 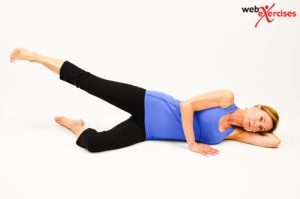 Once you have isolated the gluteus medius you can now integrate a more functional exercise with the lateral band walk. Increased hip abduction strength has been shown to improve the ability of female athletes to control lower extremity alignment. (14) When performing this exercise, the stepping motion should be performed in a semi-squat position with the knees bent rather than an upright straight leg position in order to generate greater gluteus maximus and medius muscle activity. (15) 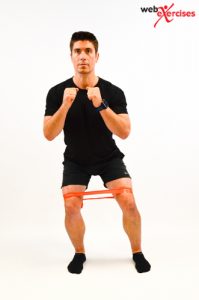 The side plank now performed as an exercise is a great way to build core strength and endurance. However, it is important to keep the hold and resultant isometric contraction to 10 seconds or less, building strength through endurance with repetitions and not by increasing the duration. Mc Gill and colleagues showed this is the best approach as it helps keep muscles from cramping and minimizes lactic acid build up. (17) Therefore, start by performing 3-5 repetitions for 10 seconds each, gradually adding more repetitions.

Since the IT band attaches to the pelvis through the tensor fascia latae and gluteal muscles it is important to stretch these muscles as well. The standing IT band stretch pictured above was found to be the most effective as Fredericson and colleagues showed and average length increase of 11%. 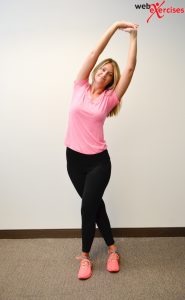 All the above displayed exercises are easy to execute and include minimal risks if performed as described. To achieve satisfying results, it is important do them on a regular basis and for a minimum of 4 weeks. The general guideline for progressing, called the “10% rule,” where total training (intensity, frequency, duration, or any combination), is not increased more than 10% per week.

Although there are many approaches to hip strengthening hopefully this has provided insight into some basic strengthening strategies. Should your client’s condition worsen at any time, an evaluation with a medical professional would be warranted.

See more IT Band Stretches by following the link to an additional blog post.

If you training a client, a squat assessment is a good place to start and, when done properly, can provide you with valuable information. The lower body must properly work in unison to move through triple flexion and extension of the hip, knee and ankle giving the trainer valuable insight helping to identify musculature stability and dysfunctional movement patterns. (8)

Hip-Knee-Foot Alignment
Pay close attention to the knee and if it crosses the medial malleolus. This movement dysfunction may be the result of hip musculature weakness, an ankle dorsiflexion problem or over pronation. 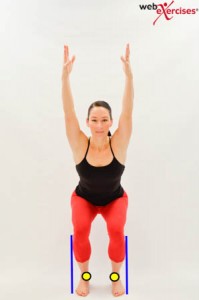 Pelvic rotation and tilting should be assessed as this could be due to compensation for the low back or hip musculature. Monitor the level of the hips in relationship to the floor.

Once the lower body movement pattern has been assessed, testing the core musculature is essential since the core functions as the center of all movement along the kinetic chain. (9) There are several studies in the literature that demonstrate the importance of proximal core stability and its relationship to a decrease in lower extremity injuries. (10)

The side bridge test as described by McGill is an easy and functional way to assess the lateral core musculature. To perform, have the client positioned on either their right or left side to start with the elbow underneath their shoulder and the top foot in front of the other. Have them lift their hips off the floor and place the hand of the top arm on the opposite shoulder.

A straight-line position should be held for the duration of 90 seconds for males and 75 seconds for females. (11) Look for any movement faults including hips swaying forward or back, hips sagging downward or shoulders rotating forward. Repeat on the opposite side and compare time. 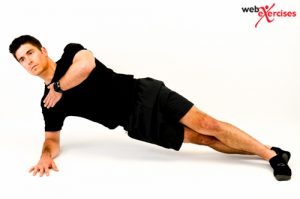 To keep track of your clients’ overhead squat assessment results, you can input their compensations into the NASM Edge app. Based on the results, it will recommend corrective exercises that you can assign to your clients. The app was recently updated with more than double the number of available exercises, and even more are on the way.

Check out these relevant resources on corrective exercise: 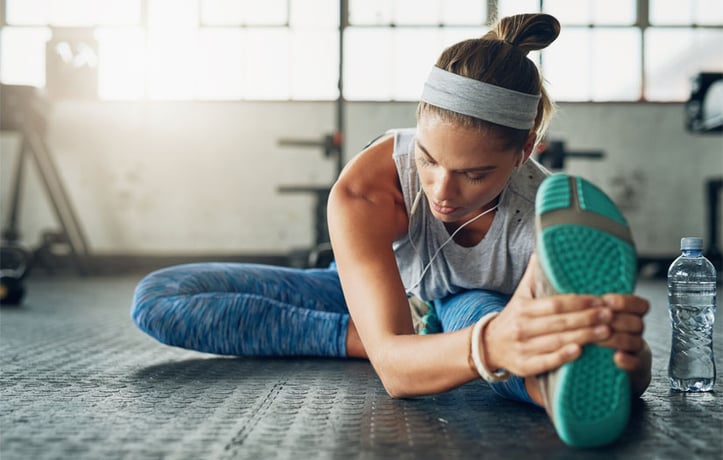 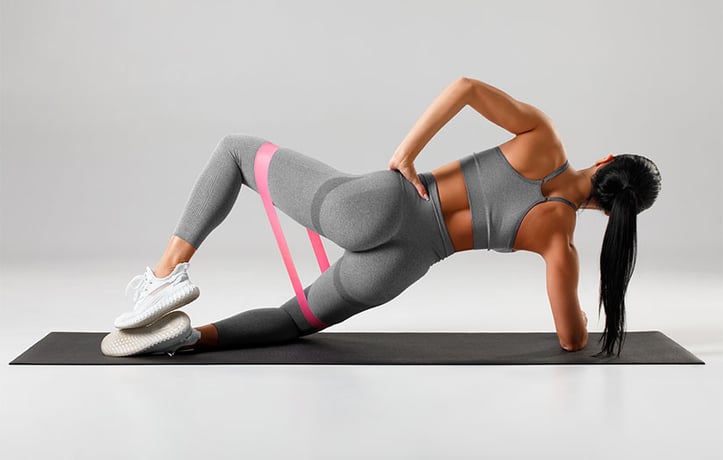 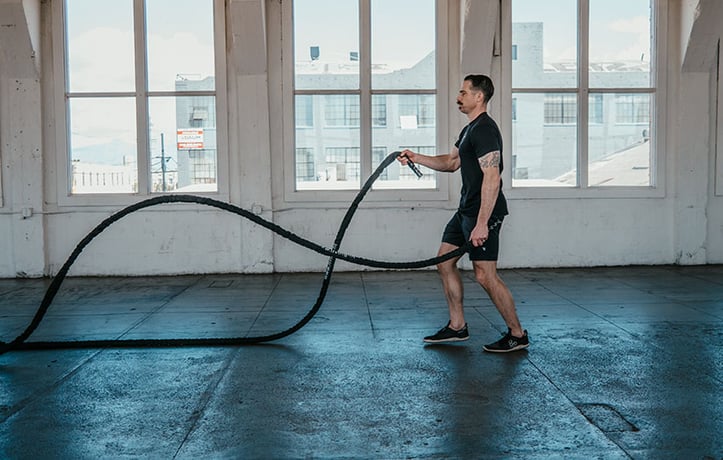