Running shoe, minimalist shoe, or just taking it all off and going bare? Take a walk with us as we share how the type of footwear worn impacts running style and how to step into a minimalist transition training program.

The debate continues and is perhaps becoming more spirited in light of the growing popularity of minimalist shoes. According to SportsOneSource, sales of minimalist or barefoot shoes (e.g., Nike Free®, Vibram Five Fingers®) represent at least 12% of all running shoes sold in a 2.5 billion dollar industry and continues to grow at a faster rate than regular running shoes (1). It comes as no surprise to learn that these shoes, originally introduced by Nike in 2004 (Nike Free) and Vibram in 2005 (Five Fingers) are now offered by over two dozen different shoe manufacturers.

This is achieved by the removal of most, if not all of the shoe midsole (i.e., cushioning between the outsole and the insole). This creates a shoe that is lighter (generally less than 9 ounces or 255 grams) and offers less cushioning and lateral stability (control) – mandating the individual actively engage their own physiological systems to achieve both. However, the implications of ‘zero drop’ technology to the human body is significant, ranging from alterations in posture and movement (i.e., running mechanics), to injury and prevention strategies.

Are There Benefits to Minimalist Shoes?

Many questions remain. Are there real benefits to this minimalist movement? Should we continue to run in running shoes? Are running shoes doing more harm than good? These arguments are fueled by minimalist popularity, but the debate is not new. It dates back to 1960 when Abebe Bikila of Ethopia won the Olympic Marathon in Rome running barefoot. Then Zola Budd, a South African distance runner, set the 5,000m world record and competed in the 1984 Los Angeles Olympics barefoot, demonstrating that barefoot running presented no barriers to performance.

Although researchers like Adam Daoud and Daniel Leiberman; and marathoners and medical experts like Mark Cucuzzella (2:24 marathon time) have long supported a return to a minimalist-style of running, perhaps the most influential person for this paradigm shift in thinking has to be Christopher McDougall, who authored the book ‘Born to Run: A Hidden Tribe, Superathletes, and the Greatest Race the World Has Never Seen’ in 2009 (2).

What started as a quest to find answers to why his feet hurt after being repeatedly injured as a runner himself, became a journey of discovery. McDougall found the reclusive Tarahumara Indians of Mexico who practiced techniques that allowed them to run hundreds of miles without injury or breakdown. His book gained recognition for how he overcame his own injuries and the opinions from medical experts to stop running. In the process, he discovered his own inner ultra-athlete by completing a 50-mile run challenge using the Tarahumara running style and continues to run today.

This shift in thinking and opinion has certainly changed the mindset of many with respect to training and human movement science. For a Certified Personal Trainer (CPT), a Performance Enhancement Specialist (PES) or a Corrective Exercise Specialist (CES), a more thorough understanding of this trend and the science driving the arguments are certainly relevant and merited. Ultimately, we all share a consistent thread in training our clients, patients and athletes; namely to improve movement efficiency and avoid injury. Consequently, if running is an exercise component in your program, perhaps this debate needs to be considered.

The human foot is a complex and amazing structure with 33 joints, 26 bones, about 24 intrinsic muscles (not crossing the ankle joint), 10 extrinsic muscles (crossing the ankle joint), and countless sensory receptors; all designed to help move us efficiently by absorbing forces (on landing) and creating forces (during propulsion), all while offering dynamic stability and mobility throughout movement.

Yet we keep it cradled in a shoe where the likelihood of losing strength and tactile responsiveness is increased. In a shoe we have greater sensory interference between the sole of the foot and the ground, and shift more responsibility for cushioning and stability into our footwear or our legs, hips and low back. This translates into a weaker, less aware platform for movement that relays less sensory feedback on spatial orientation and alignment, or more simply stated, this promotes poor posture and dysfunctional (compensated) movement.

During gait (walking) – our default movement pattern, the body prepares itself for heel strike by positioning the foot in a slightly supinated position. This position aims to invert the calcaneous (heel bone) on contact, compressing the bones of the feet together to increase stability within the structure as it accepts load (3). As the forefoot lowers to make contact with the ground, the foot pronates inward leading to eversion of the calcaneous (providing more mobility), whilst relying upon the elasticity within the longitudinal and transverse arches to act as springs and absorb some of the impact forces.

A common mistake made is to examine the wear patterns of shoes and assume it reflects how we stand. During gait the outside portion of the heel should strike first, undertaking a greater burden of load, thus should wear faster – this does not reflect standing posture.

Furthermore, during running our mechanics change significantly as we spend 30% of our gait cycle in the air (2 x 15% float phases – one for each leg) and land with our stance (support) leg positioned directly under our center of mass (COM) (4). This implies moving the stance leg further under the body in the frontal plane to maintain balance and avoid falling. To better understand this explanation, perform a series of single steps, each time placing your right foot on the ground in front of you, but alter the foot position each time to progressively move it under your COM as you would when running. What you should notice is a more supinated position as the right foot moves inward in the frontal plane. Repeat this process while maintaining a flat foot each time and notice the increased amount of stress (valgus) placed at the knee. Supination on heel strike is critical to preserving your knees, thus running should wear down the outside of your shoes faster.

So why use a RFS then when running? Part of this question can be explained by the original information on impact forces between barefoot and cushioned RFS that triggered the running shoe boom of the 1970s as an opportunity to reduce running-related injuries. Ironically, since then, the percentage of runners getting injured each year has remained rather consistent - recreational runner injury rates vary between 37 and 56%; long distance runner rates vary between 19.4 and 79.3% (6, 7). Although some argue inconsistencies in study methodology when comparing ‘then-and-now’ injury statistics; the general consensus appears to be one where the running shoe has not reduced the incidence of running-related injuries. One might even argue that a new series of musculoskeletal issues have emerged since the introduction of the elevated and cushioned heel that has changed standing, walking and running mechanics.

More recently, Daoud and colleagues examined 52 cross-country runners where 36 subjects (69%) were primarily RFS while 16 subjects (31%) were primarily FFS. At the end of the study, it was estimated that approximately 74% of the runners experienced some form of moderate-to-severe injury each year, but the habitual RFS had about twice the incidence of repetitive stress injuries than individuals who habitually used FFS (8).

In order to facilitate an understanding of the effect of impact forces, consider the following analogy. A steel bridge is designed to withstand many forces including vibrational forces (e.g., repeated waves or oscillations from earth movements). However, the rigid nature of steel makes it better suited to tolerating high frequency forces rather than low frequency forces which are characterized by large undulations (waves) in the force frequency. In the latter case, the bridge sways, placing tremendous stress within the steel beams that may result in failure (explaining why we build suspension bridges).

In similar fashion, our hard structures (i.e. bones) are better suited to tolerate high frequency forces whereas our soft tissue is better suited to tolerate lower frequency forces that can absorb these larger undulations into elastic tissue. Considering how ground reactive forces fit the category of low frequency forces, soft tissue is better suited to absorb this force. In other words, rather than using a RFS when running with high impact forces (4 – 11x body weight) that transmits much of the force into the skeleton, a MFS or FFS involves an eccentric stretch into the calves as the heel drops (after contact), coupled with slight knee and hip flexion that helps dissipate forces more easily through the kinetic chain. Additionally, the elastic loading into the posterior chain, may also aid in propelling the body forward in recoil.

While cushioning in the modern running shoe may reduce heel strike forces, it also encourages people to land on their heels when running and develop different biomechanical running strategies. Approximately 75% of shod runners heel strike and while we may not definitively know why, several explanations have been proposed (9):

Therefore, if we have the opportunity to simultaneously reduce impact forces and potential injury risks, and it comes at no additional cost to metabolism, should we consider a transition to a minimalist-type strategy that involves MFS or FFS during endurance running?

Transitioning to a Minimalist Approach:

Perhaps the most important guideline is to transition slowly – to build a solid foundation, develop good technique, and then build training volume. Too many people transition too quickly without first completing the necessary pre-requisites and end up getting hurt.

If we plan to biomechanically prepare the body for this transition, then it should start with addressing how we stand (i.e., neutral, supination or pronation - more common). Various methodologies to assess pronation/supination exist, but here is one simple approach (12):

Your progressive training program should first develop the foundational components of proprioceptive awareness, stability and mobility in the feet then systematically train to load the body vertically through the kinetic chain (hopefully maintaining neutral sub-talar position) before introducing more complex static and dynamic exercises to prepare the body for MFS / FFS running. Table 1 outlines a basic progressive program one can follow.

Generally, the transition from a RFS to a FFS / MFS involves specific biomechanical changes in running technique. While a PES skilled as a running coach can effectively instruct an individual to improve their running mechanics, a brief list is provided for your consideration:

In closing, while concerns expressed within the medical community tell us that countless hours spent pounding the pavement leads to debilitating injuries, and wear and tear on our joints, more and more runners continue to flock to the starting line for marathons and other distance runs (13). Given this trend, should we shift our focus to address a MFS / FFS approach to running to potentially preserve the body from chronic overuse and if doing so, is it time to address this transition through a slower, progressive and more effective approach? 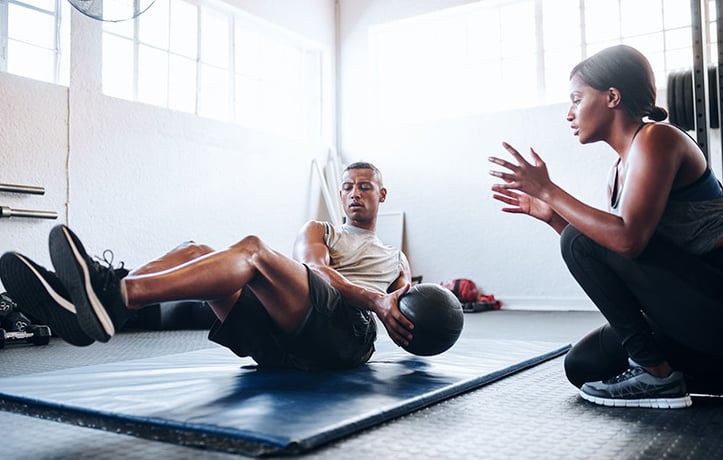 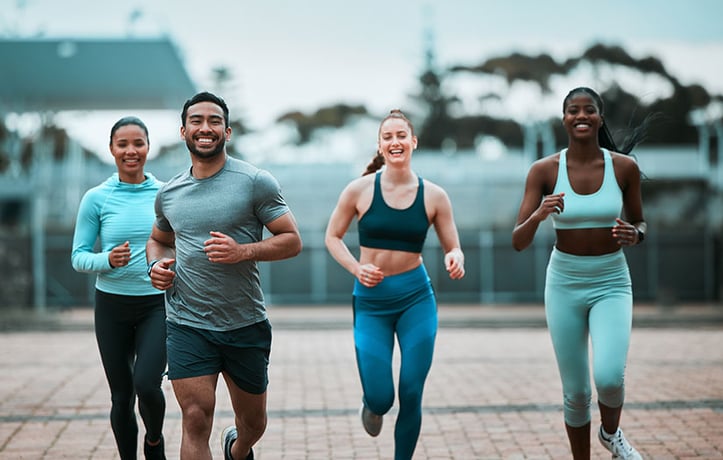