Our upper extremity is designed around our hands, our primary tool in manipulating objects in our environment. To this end, the shoulder complex provides the upper extremity with a wide range of motion, allowing us to position our hands in front of, behind and above our body, pulling or pushing on objects. Enhancing shoulder function and preventing injury to the shoulder is often a key aspect of the programs we design for our clients. The purpose of this article is to understand the importance of the scapular stabilizing muscles to the overall function of the shoulder complex. Individuals with alterations in static or dynamic scapular position are at an increased risk for acute and chronic shoulder injury.1 Their maximal performance is also diminished.

Dynamic Stabilization of the Glenohumeral Joint

Much of the function afforded by the shoulder complex is provided by the glenohumeral (GH) joint, the joint between the humerus and scapula. Additionally, many of the injuries we see in this region are manifested by damage to the structures of the GH joint. Often ignored, however, is the role the scapular muscles play in normal shoulder function and prevention of injury.1-3

The GH joint is inherently unstable due to its bony structure and lax ligaments. Therefore, much of the stability of the GH joint is provided by the rotator cuff musculature. The rotator cuff consists of the supraspinatus, infraspinatus, teres minor and subscapularis, all of which originate on the scapula, tying the function of these muscles to the position of the scapula during shoulder movement. An improperly positioned scapula can decrease the efficacy of the rotator cuff leading to increased risk for instability, glenoid labrum tears, rotator cuff injuries and biceps tendinitis.1

It’s also been estimated that shoulder strength is increased by up to 24% with appropriate scapular stabilization.5,6 Therefore we must consider the scapula during evaluation of our clients and consider addressing any issues we may find in regards to strength, muscular tightness or scapular dyskinesis (abnormal scapular motion during shoulder movement).

Scapular issues commonly present with a tightness and over activity of the upper trapezius and pectoralis minor. This results in a scapula that is positioned inferiorly and protracted when compared bilaterally or to norms. During movement, individuals with scapular dyskinesis also have decreased upward rotation of the scapula, adding to the instability of the GH joint and decreasing subacromial space.1-3

As in other regions of the body, we see that overactive/tight muscles are often paired with weak/underactive muscles, decreasing the ability of these force couples to maintain the static or dynamic position of the scapula during movement.7 In many cases the lower trapezius and the serratus anterior muscles are found to be weak and/or underactive in individuals with scapular dyskinesis.8

Corrective exercise can be very effective in the restoration of neuromuscular control of the scapula, helping to return normal function and enhance the overall function of the shoulder complex. As always, the best training programs begin with a thorough assessment. Exercise should be used to restore normal static and dynamic function of the scapula.

An exercise program to improve scapular control should include proximal kinetic chain exercises aimed at improving scapular muscle strength, flexibility training to minimize tight muscles pulling the scapula out of position and exercises to enhance the functional force couples of the scapula.1

Static evaluation of individuals with scapular dyskinesis often present with excessive protraction and scapular depression. Typically this positioning is also seen during movement along with a reduction of upward rotation. Therefore, our clients will benefit from a program including exercises like the ones listed below.

Strengthening should target the muscles that form force couples with the upper trapezius and pectoralis minor, namely the serratus anterior and the lower trapezius. These muscles can be isolated for strengthening. A simple isometric exercise for these muscles is the inferior glide1 and can be used in a wide range of clients. A very effective exercise for the lower trapezius and serratus anterior is the modified robbery exercise as reported by Wilk et al.3

This exercise can be made more challenging by completing the exercise while sitting or standing on an unstable surface while the motion is performed. The lawn mower exercise can be effective as well with the additional benefit of including the core and lower extremity, possibly enhancing coordination between these regions.1 The low row exercise and scaption are good choices to target the lower trapezius as well.1,10 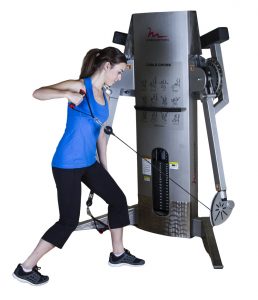 Stretching of the pectoralis minor should be included in the training program. There are multiple stretches to target the pectoralis minor, however, one study by Borstad and Ludewig11 found the corner self-stretch to be most effective in lengthening this muscle.

This stretch is easily performed and requires no equipment. Individuals should also be examined for tightness of the pectoralis major as this can also result in scapular protraction and rounded shoulders. Upper trapezius shortening has also been indicated as a potential cause of scapular dyskinesis. Testing for a tight upper trapezius was described by Yesilyaprak12 and may indicate those who should focus on stretching this muscle.

Finally, exercises aimed at improving the function of the scapula should focus on normalizing the co-contraction of the force couples that accurately position the scapula during movement.1 The push-up plus exercise has been shown to be effective at increasing the activation of the serratus anterior in conjunction with the upper and middle trapezius.

Increased activation resulted from performing this exercise with the hands placed on an unstable base of support providing for a range of options when performing this exercise.13 Other closed kinetic chain exercises that can enhance function include dynamic stabilization exercises and wall washes.1,8 It is best if these exercises are performed with the scapula in a retracted position to avoid tightening of the pectoralis minor.

The shoulder complex relies heavily on the scapular stabilizers to maintain optimal scapular position throughout movement. Scapular dyskinesis can decrease function of the shoulder complex and increase the risk for injury. Luckily, proper attention to the scapular stabilizers can prevent and help correct scapular dyskinesis. Exercises addressing this issue can easily be added to any resistance training program.