So much happens to a woman’s body during the nine months of pregnancy (which is actually a 40 week countdown). We’ll look at some of the physiological changes that occur that fitness professionals should be aware of and how these can impact exercise programming.

Should women exercise during pregnancy, and if so, how much? This continues to be a heavily debated discussion and the answer can be very individualized. Women, especially those who were not physically active prior to pregnancy or who have medical complications, should have a medical evaluation prior to beginning an exercise program. Guidelines for most women without medical or pregnancy complications fall in line with the CDC’s recommendation of 30 minutes or more of moderate intensity exercise on most, if not all, days of the week (1,2). If they were already exercising before conception they may typically continue with moderate levels of exercise until the third trimester, though if they have a history of (or risk for) preterm labor or fetal growth restriction, activity should be reduced in the second and third trimesters (1,3).

In the first few weeks of pregnancy resting heart rate starts to rise and continues to climb into the third trimester. An increase of 10 to 15, even 20 beats per minute is normal. With this variability, using the talk test or ratings of perceived exertion (RPE) could be a better monitor of exercise intensity than using target heart rate (4,5).

Blood volume increases 40% to 50% by the middle of the third trimester (6). There is also an increase in cardiac output of 30% to 40% due to the increase in blood volume (6,7). These cardiorespiratory changes also lead to a decrease in work capacity (3,6). Additionally there is a potential decrease in blood pressure as more blood flow is directed toward the uterus along with the hormonal changes that increase the elasticity and volume of the circulatory system (4,7). These cardiovascular and hormonal changes cause some of the early pregnancy symptoms of fatigue, shortness of breath, nausea, light-headedness, and dizziness when getting up, but dissipate in the second trimester as blood volume meets the expanded size of the circulatory system (4).

These changes also increase the blood flow to the skin surface to help dissipate more heat. Pregnant clients will probably notice that they feel warmer and the skin flushes more easily. Encourage clients to select heat dissipating clothing that accentuates this adaptation along with adequate hydration (4,5).

Positioning during exercise can also impact the cardiorespiratory system. After the first trimester, exercising in the supine position is to be avoided (1-3). In this position, pressure from the growing fetus would rest on the vena cava leading to a reduced return of blood flow to the heart. Also avoid exercises on the belly in a prone position after the first trimester (3,6).

Hormonal changes that were at work on the circulatory system are also at work on the ligaments, especially those in the pelvis. Women produce relaxin as a part of their normal monthly cycles, but when pregnant, levels of this hormone rise and peak during the first trimester and near delivery. This hormone increases the laxity in the ligaments of the pelvis and softens the symphysis pubis to accommodate the growing fetus and allow for passage during labor (6). Relaxin also affects other ligaments throughout the body which can lead to possible overstretching and joint instability (6).

As the uterus expands and the pelvis tilts anteriorly producing an exaggerated lordotic curve, many women experience low back pain and/or round ligament pain (6,8). The round ligament connects the uterus to the pelvic cavity and becomes stretched, a lot. Typically the sharp pain associated with the strained round ligament affects the right side but it can occur on both sides (8). Quick movements such as sneezing, coughing, standing up too quickly, or even rolling over can trigger the pain, as can exercise. Exercises to strengthen the core and gentle stretching are helpful, along with changing positions slowly, and flexing at the hips to reduce the pull on the ligament (8).

Core and pelvic floor strengthening are also important for the pregnant client (3,6). Avoiding the supine and prone on the belly positions after the first trimester for core exercises requires some creative modifications (1,3,6). Options include curls in a side-lying, semi-supine position, iso-abs (plank) with the arms on an elevated surface or in a side-plank position, pelvic tilts standing (Figure 1.1) or seated on the ball, standing cobras, and core exercises in a quadruped (all fours) position, in addition to Kegels (6). If a pregnant client is diagnosed with diastasis recti, a splitting of the rectus abdominis at the linea alba, core exercises may need to be limited to gentler activities such as Kegels and standing pelvic tilts (6). 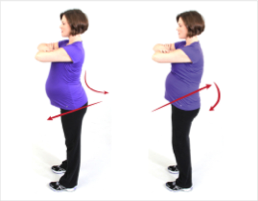 The shifting in posture as the fetus grows also changes the woman’s center of gravity (3,6). Performing balance training activities can help decrease the incidence of falls. Fitness professionals can use stable surfaces with various modifications (including support for stability) to train balance to keep falling risk minimized (6).

It is suggested to keep exercise programming in Phase 1 and 2 of the NASM Optimum Performance Training ™ (OPT™) model for the first trimester of pregnancy, and reducing to only Phase 1 for the second and third trimesters (3,6). Plyometric activities are also not advised after the first trimester, nor are uncontrolled twisting motions of the trunk (3,6).

Each woman’s body, abilities, physical condition, personal preferences, and experiences play into what is best for her and her developing fetus. Research continues to identify the many positive benefits of exercise during pregnancy for both the mother and baby, but there are contraindications to exercise and signs to stop exercising that fitness professionals should know and follow (Table 1.1). Pregnant clients should also obtain medical clearance for participating in an exercise program and be monitored throughout their pregnancy. 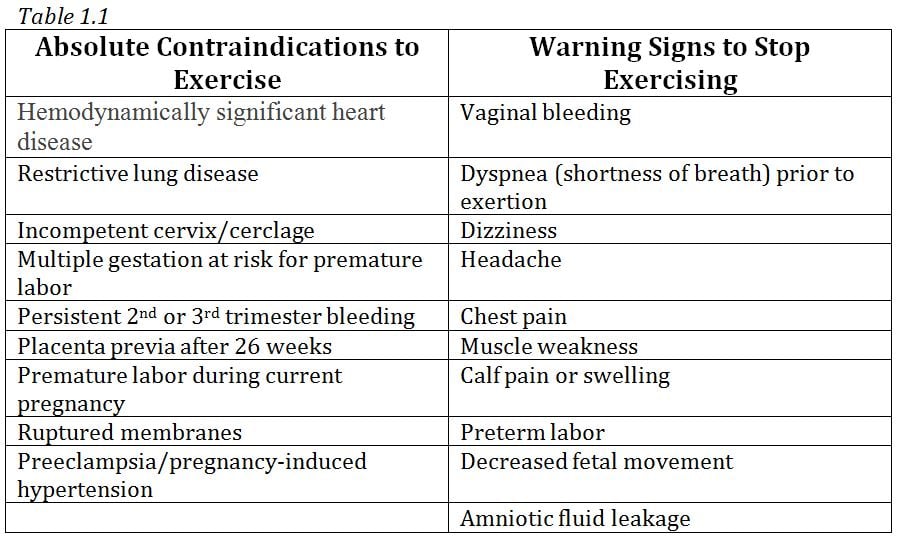 Source: Exercise During Pregnancy and the Postpartum Period. ACOG Committee Opinion No. 267. American College of Obstetricians and Gynecologists. Obstet Gynecol 99: 171-173, 2002.

For more on exercise and pregnancy check out NASM's Women's Fitness Specialization. 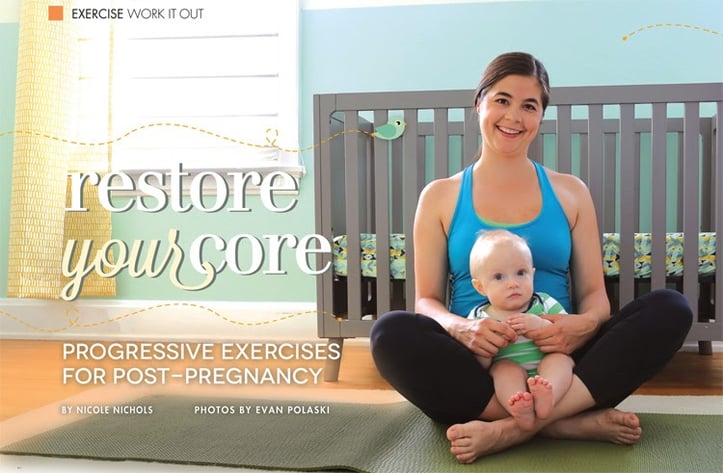